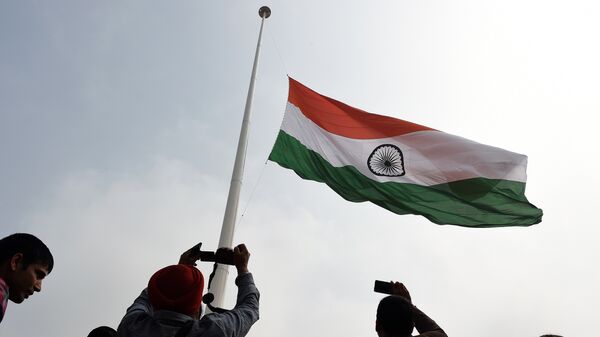 © AFP 2023 / MONEY SHARMA
Subscribe
International
India
Africa
In the last two years, India has made several changes in Special Chemicals, Organisms, Materials, Equipment, and Technologies (SCOMET) rules to align itself to multilateral export control regimes. SCOMET can be used for civil and military applications but their export requires state authorization.

New Delhi (Sputnik) — India has been formally inducted as the 43rd member of the Australia Group (AG). The AG is the cooperative and voluntary group of countries which, through export controls, seeks to counter the spread of materials, equipment, and technologies that could contribute to the development or acquisition of chemical and biological weapons (CBW) by states or terrorist groups.

"With its admission into the Australia Group, India has demonstrated the will to implement rigorous controls of high standards in international trade, and its capacity to adapt its national regulatory system to meet the necessities of its expanding economy. India is also aware of the need to constantly adapt its export controls in the face of rapidly evolving scientific and technological challenges, and in this regard, affirmed its readiness to act in close cooperation with all members towards the furtherance of Australia Group objectives," the group said in a statement on Friday.

Pleased to welcome 🇮🇳 as the 43rd member of the Australia Group export control regime. Look forward to working together to strengthening our collective efforts against the proliferation of chemical and biological weapons. @MEAIndia @dfat @PMOIndia

While remaining a non-signatory to the Non-Proliferation Treaty (NPT), India has gained membership of the Missile Technology Control Regime and the Wassenaar Arrangement. However, despite strong pitching, India's entry into the Nuclear Suppliers Group (NSG) has been blocked by China, which insists that Pakistan should also be allowed entry into the NSG should India get membership.

"Our credentials have been established since we have become members of these three groups, latest being Australia Group. As far as NSG membership is concerned, we do remain engaged with all the countries who are members of NSG and we hope our credentials are taken into account as and when the decision is taken, " Raveesh Kumar told reporters in New Delhi.

Membership of the NSG would enable India to have enhanced and uninterrupted access to nuclear technology, fuel, and materials required for expanding its civilian nuclear program.