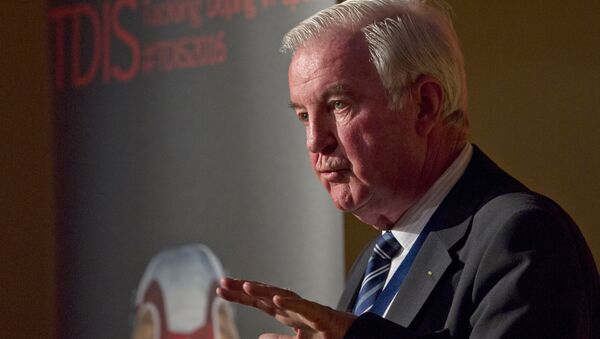 © AFP 2022 / JUSTIN TALLIS
Subscribe
MOSCOW (Sputnik) – The upper chamber of Russian parliament has prepared a preliminary list of foreign officials, including WADA President Craig Reedie and US Special Counsel Robert Mueller, who may be sanctioned by the country over their actions that led to the Russian team being banned from the 2018 Winter Olympics, Russia's RBK reported Thursday.

The Russian upper house's commission on protection of state sovereignty will reportedly propose the new sanctions after the end of the Winter Olympics in South Korea’s Pyeongchang.

Embattled WADA Informant Fearful for His Life
The reports were, however, refuted by head of the commission Andrei Klimov, while earlier in January the official said that the lawmakers focused on people, who were involved in exerting pressure on sports officials so that the latter were eventually forced to ban the Russian national team. The lawmaker, however, did not specify any names.

In 2015, WADA accused Russia of multiple doping violations and suspended the Moscow laboratory of RUSADA, the Russian National Anti-Doping Agency. Next year, McLaren, head of the WADA investigative team, presented a two-part report that alleged the existence of a state-supported doping program in Russia. The report resulted in sanctions being placed on Russian athletes, which including depriving many of them of medals won at the 2014 Sochi Olympics, and banning the Russian national team from the 2018 Winter Olympics and Paralympic Games.

Dubbey and Young were responsible for communications between the WADA and the International Olympic Committee (IOC), according to leaks provided by the Fancy Bears hacking group.