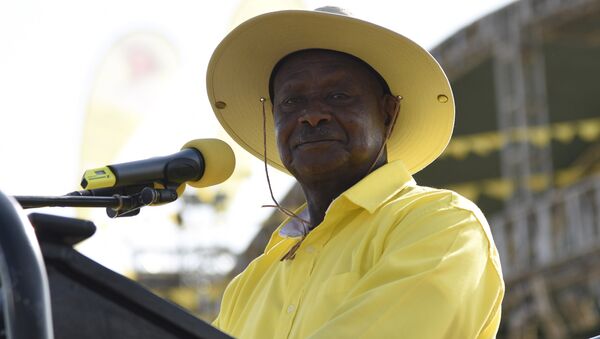 © AFP 2021 / Isaac Kasamani
Subscribe
Uganda’s president chastised the United Nations for “preserving terrorism” in neighboring Democratic Republic of Congo (DRC), a comment made during the investigation of a clash between UN peacekeepers and Congolese rebels that left dozens dead.

President Yoweri Museveni released a statement claiming that "the United Nations is responsible for preserving terrorism in the Democratic Republic of Congo," which he reportedly told UN officials during a Thursday meeting with investigators.

UN Launches Inquiry into Deadly Assault on Peacekeepers in Congo

The brief statement did not elaborate on what Museveni meant. The UN has not replied to Museveni's charge.

The investigators were in Uganda to investigate the Semuliki Attack, where Islamist militants with the Allied Democratic Forces (ADF) attacked UN and DRC forces in the embattled Kivu region, which borders Uganda in the far east of the DRC. Fifteen peacekeepers and five Congolese troops were killed, along with an unknown number of ADF fighters.

UN Secretary General Antonio Guterres described the attack on the peacekeepers as the worst in recent history.

After the battle, Uganda launched their own offensive against the ADF, destroying their camps in Congo with air and artillery strikes. Museveni has proven himself committed to keeping the ADF on the DRC side of the border, as Uganda's westernmost region is oil-rich and thus an attractive site for foreign investment — so long as it remains safe.

"This is, for us, the final offensive. We will fight them until the end, until we have secured our territory."

Watchdog: Peaceful Protesters Killed in Congo Over Calls for President to Resign

On Monday, The ADF launched a surprise attack against the DRC expeditionary force, killing three soldiers, but Kinshasa forces beat the rebels back.

The ADF is an Islamist rebel group that was founded by Ugandan Muslims to battle the secular government of Museveni. They have been a thorn in the side of Kampala and Kinshasa since 1995, but after multiple years of decline the group was regalvanized in 2013 when they merged with similar militant groups.

They have been accused of killing over 700 people since the new offensive began, as well as perpetrating a massacre in the city of Beni in August 2016 that killed at least 64.

In 2010, the UN founded the United Nations Organization Stabilization Mission in the Democratic Republic of the Congo (MONUSCO), a peacekeeping force meant to resolve the numerous territorial and tribal disputes that continue to plague Africa's second-largest country.

MONUSCO is the UN's largest peacekeeping force, with a fighting force of 18,300 — but they have proven ineffective in suppressing ADF violence and in controlling the ever-worsening crisis in the DRC. On Thursday, the UN called for $1.5 billion in additional funding for humanitarian missions to the DRC to prevent mass starvation.

000000
Popular comments
UN is turning a blind eye to the real situation in both Uganda and the DRC -- about what is really happening at grass roots in both these countries. The tragedies happening in Africa to Africans, in my humble opinion, are leading to the horrific atrocities happening in so many countries. One wonders here again, who is playing the game both sides? Reminiscent of the Boko Haram in Nigeria ... Africans want their countries-- their lives and their futures back -- God alone knows, Africa has suffered long enough at the hands of exploiting foreigners.