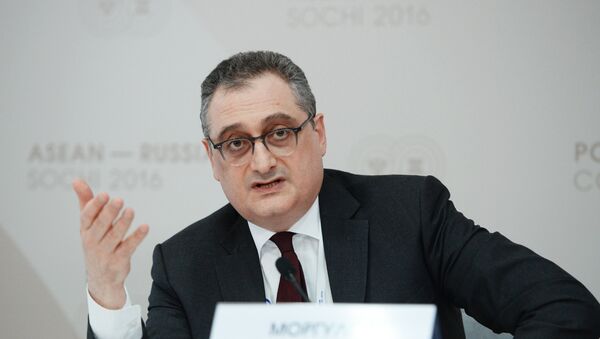 © Host photo agency
/
Go to the photo bank
Subscribe
US-led coalition forces have failed to resolve the Afghan conflict in the last sixteen years. Russia has stepped in offering to facilitate a dialogue between the Afghan government and the Taliban for the betterment of all of Central Asia.

We are proposing to create conditions (for talks)… There are no evidence of Russian assistance to Taliban… But we had helicopters bringing ISIL to northern Afghanistan: deputy Russian foreign minister #RaisinaDialogue2018 pic.twitter.com/1kg91pPgd0

​Morgulov's statement comes a day after Russia offered to host direct talks between the government of Afghanistan and the Taliban to resolve the conflict "in the interest of ending a fratricidal civil war" that has raged for more than 16 years. It was against this backdrop that BBC journalist Yalda Hakim, moderating the discussions at the Rasina Dialogue, asked Morgulov whether Russia had direct contact with the Taliban.

"Of course we have periodical contacts, which focus on two items: the security of Russian citizens in Afghanistan and on how we can facilitate the Afghan government and the opposition forces to sit down and talk about peaceful reconciliation," he replied.

The Russian diplomat categorically denied any kind of Russian assistance to the Taliban and said that Afghan government has not been able to provide any evidence of such a claim made by one of its commanders.  However, it is true that foreign fighters are being smuggled into northern Afghanistan through helicopters that do not bear the identification of any agency, he claimed.

"We see helicopters which bring foreign fighters to northern Afghanistan. We asked the government in Kabul and we asked NATO commanders; where these come from because we know that this is NATO and Afghan government who is controlling the airspaces," Morgulov added.

When asked what evidence he had to back his claims, the Russian diplomat said that Moscow was in possession of a video in which local people of northern Afghanistan are testifying such incidences. "Local people are saying to the local government as well, but local government is not responding to this evidence," Morgulov said.

The Raisina Dialogue is a multilateral conference held annually in New Delhi to discuss threadbare challenging issues before the global community.