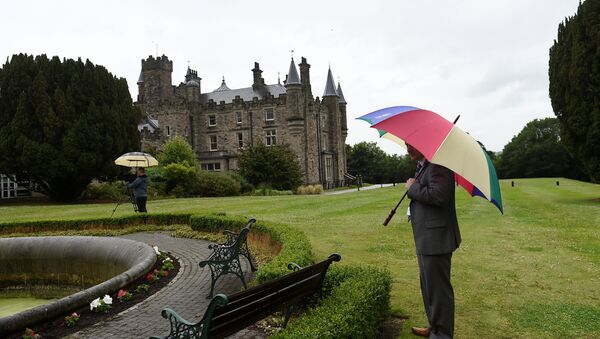 The new Northern Ireland secretary Karen Bradley has announced that a fresh round of talks aimed at restoring power-sharing government to the province will start next week.

Karen Bradley has said that in her short time in the job it has become clear there is one last opportunity to get a deal.

Northern Ireland has been without a fully functioning assembly since January 2017 when the nationalist party Sinn Fein withdrew from the coalition government, after the late deputy first minister of Northern Ireland Martin McGuinness resigned from his post triggering the collapsed of the devolved, power-sharing administration.

Subsequent talks to resurrect power-sharing throughout 2017 failed over the DUP's refusal to agree to Sinn Féin's demands for an Irish Language Act, which would put Gaelic on the same legal status as English in the region.

Liam Kennedy Professor of Economics & Social History at the Queen's University Belfast spoke to Sputnik ahead of the new talks and whether he sees any agreement being reached.

Sputnik: Do you think a new Irish secretary could bring fresh impetus to the talks?

Liam Kennedy: it wouldn't be difficult, James Brokenshire the previous Secretary of State for Northern Ireland in the later stages was relatively ill. So yes I think she can bring fresh energy and perhaps a fresh perspective as well, I have very tiny cautious optimism about what might be possible in the weeks ahead.

Sputnik: Are the two main parties too far apart now to come back to form a coalition?

Liam Kennedy: Karen Bradley and the Irish Minister Simon Coveney who's involved with her in trying to get talks restarted, they've both said areas of disagreement aren't that great. Now having said that either of the two major parties can dig in on a small number of issues that they regard as hugely important to them. Sinn Féin, for instance, has claimed since January last year, when they pulled down the power-sharing executive, they claimed the DUP partners didn't show them sufficient respect. That's quite a difficult issue to handle as it's very difficult to sign what respect means. There are also issues about the Gaelic language which Sinn Féin see as central to their cultural policies for Northern Ireland and have made it a red line, the DUP are adamantly opposed to that.  Even taking the more pessimistic view even one or two seem to outsiders relatively minor issues could actually foul up the whole process

Sputnik: Is the fact that the DUP are supporting Theresa May's Conservative Party a factor in these talks, do they have the upper hand?

Liam Kennedy:  It's an area of suspicion between the two big parties here, Sinn Féin argues that the new Secretary of State Karen Bradley is not a neutral figure because her government is the Tory government, is being propped up by the Democratic Unionist Party. I would imagine she would argue that she's approaching everything with an open mind and is not looking over her shoulder at the alliance between the DUP and the Tory party. That is a further complication.