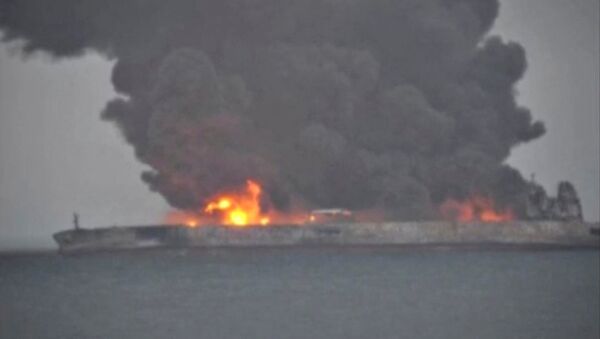 © REUTERS / CCTV
Subscribe
With the voyage data recorder still being examined from the Iranian Sanchi tanker in South China Sea that sank earlier in January, several experts shared their views with Sputnik on the tragedy.

In an official announcement, an Iranian Navy official said that all members of the Sanchi oil tanker, which collided with a Hong Kong bulk carrier, have died. The crew consisted of 30 Iranians and two citizens of Bangladesh. The resulting fire went on for eight days. Rescue operations continued during this time, until, on January 14th, another explosion tore away the bow of the tanker. Just a few hours later, the tanker sank in the South China sea, leaving shambles and a huge oil spill behind.

Tehran Confirms Death of Olympus Tanker Crew in East-Chinese Sea on January 6
Many opinions and versions of the story appeared in the media, attempting to explain why the tanker collided with Hong Kong CF Crystal bulk carrier. Some experts blamed China for the incident. However, Iranian officials have already debunked some of these rumors.

Sputnik spoke with Dr. Hadi Haghshenas, vice chairman of the Port and Maritime Organisation of Iran, which is directly involved in the investigation of the tragedy.

"I must point out that both China, South Korea and even Japan, from the very beginning of the incident, provided help and collaboration within international conventions. We have no complaints towards them," he said.

"Sanchi was built in 2008. It had a different price then, soo it's difficult to estimate the costs. But in general, the ship, its equipment and cargo costs approximately $100 million.

Haghshenas also pointed out that it is too early to draw any conclusions about who is guilty in the tragedy, because first one must decode the voyage data recorder (VDR) data and wait until the investigation is complete.

"We are in close contact with all sides involved — China, South Korea, Japan and Panama, including the company that owns the ship that went under the Hong Kong flag and rammed our tanker," he said. Sanchi, as almost one quarter of all other ships in the world, was registered in Panama.

"Right now, the VDR is in China. Thus, until it is thoroughly examined and handed over to our specialists, drawing conclusions and making statements regarding the precise reason for the Sanchi tragedy is inappropriate," he said.

In the meantime, Omid Shukri Kalehsar, an analyst and expert on energy security from Washington, said the following:

"The wreck of the tanker is one of the most tragic events in the maritime history of the last decade. The ship carried 136 tonnes of natural gas condensate, which is equal to 1 million barrels of oil. The ship was sailing from the Iranian island of Kharg to South Korea. The cargo was meant for the South Korean company Hanwha. Its cost is estimated at $60 million, and it was paid to Iran in advance."

Two Bodies Recovered From Burning Iranian Oil Tanker in East China Sea - Reports
"Regarding the ship and the cargo, according to the chairman of the Central Insurance of Iran, Abdolnasse Hemmati, 30 percent of the insurance comes from Iran (20 percent from Alborz insurance company and 10 percent from the Mellat insurance company) and the remaining 70 percent comes from a company from Norway. Hemmati also noted that compensation payments from Alborz are estimated at $10 million and payment from Mellat at $5 million. As for the cargo, its cost is more than twice as much as the ship ($70 million), and the expenses, probably, will be paid by the buyer."

Captain Said Meili, who has 15-years of experience sailing, told Sputnik about the technical aspects of the sinking of Sanchi and why the Iranian sailors did not get rescued.

The Grand Canal — a nightmare for sailors.

According to Meili, the collision happened in the worst place for maritime navigation in China — at the entrance of the Grand Canal — because both large and small vessels navigate through there in various directions.

"Navigation always was and will be difficult there," he said.

In these conditions, there are almost no opportunities to maneuver in case of emergency. "There is a possibility that a ship will avoid one obstacle but will ram into another," the captain said.

Could it just vanish from the radar?

"Vanishing of such a large object as a whole ship from radar is impossible," captain Meili explains. "The two ships undoubtedly could see each other."

Despite both ships being visible on the radar, the collision could still have been unavoidable. According to the captain, sea catastrophes often happen because of technical malfunctions or human mistakes.

"We call it a ‘close quarter situation' — that is when two ships are very close to each other. The efforts of one ship [to avoid a collision] might not be enough: the two ships must act in a coordinated manner. It's a very complicated situation."

The captain says that VDR data will enable investigators to understand whether the two ships tried to communicate and alter their routes to avoid the collision.

The bow part is the toughest part of the ship, taking the shock in the case of a collision.

"The Chinese bulk carrier hit the tanker with its bow, which implies that, probably, the bulk carrier crew pointed the ship towards the tanker to minimize their own damage and that is very sad," captain Meili said.

According to Meili, another possible mistake by the Chinese vessel could have been an attempt to separate from the tanker after impact, because the friction of the ships' metal in such a situation can cause a fire and an explosion.

The experts determined that the whole ship was not on fire, only specific points.

"Regarding whether the crew had a chance to survive, it should be noted that everything depends on the first explosion. The initial explosion was so dreadful that, unfortunately, all of the crew died," captain Meili explained.

"If there were at least 30 minutes between the collision and the explosion, the crew could survive, because rescue measures take only 20 minutes. The captain's order is important here, because until he gives an order to abandon ship, everybody does their best to save the ship. It's a very difficult decision for the captain," Meili said.

For the first several days the Chinese rescuers were dousing the tanker, trying to put out the fires. The Japanese joined on the fifth day. The fire was so strong it was impossible to approach the blazing vessels.

"One cannot say that the Chinese did too little to save the vessel. Anyway, they are human beings too. Everyone would get scared of a fire and a ship that might go ‘boom' again at any moment. They could only enter the zone that was not on fire and extract two dead bodies and a data recorder from the stern of the ship."

According to the captain, "the whole crew saw that," but crew members are not allowed to comment or give interviews because China wants to avoid responsibility for the incident.

Suggestions that the US is involved in the incident Meili called "rumors."

000000
Popular comments
Horrific tragedy. One can only render deepest condolences to the families who lost their loved ones in such a gruesome way.