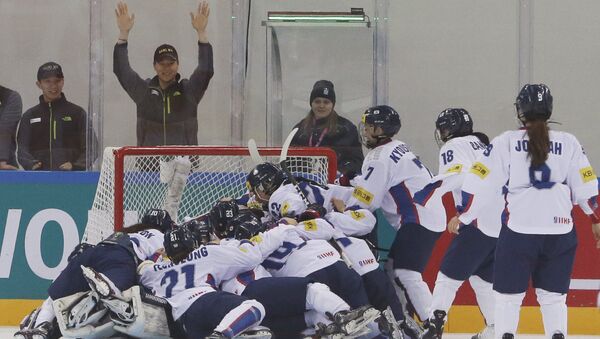 Even though South and North Korean athletes will march together at the opening ceremony of the 2018 Olympics in Pyeongchang, the atmosphere in the joint female ice hockey team looks less serene.

Korea’s female hockey players hate the prospect of having to play in one team with their colleagues from the North during the upcoming Winter Olympics in Pyeongchang.

The members of the South Korean team learned about the idea of a joint Korean Olympic team immediately upon their return home from the United States where they had spent the past three weeks training for the Games.

South, North Korea May Run in Joint Bobsleigh, Ice Hockey Teams in Olympics
The players worry that some of them will have to leave the team to make way for their North Korean peers, and also about the prospect of teaming up on the ice with total strangers, Reuters reported.

“We can only take 23 players to the Olympics, and they thought these North Koreans are going to come in and take our spots,” Murray said during the team’s training swing through the United States.

While exciting many in South Korea, the proposal for the two countries to present a unified front at the Winter Olympics has also angered many resulting in a sharp uptick in petitions against the unified team.

More than 100 such petitions have been posted on the presidential website this past week alone with one petition garnering over 17,000 voted, Reuters wrote.

“I can’t help but think that the government is abusing its power to make political gain from the Olympics. Taking away hard-won spots from the South Korean athletes and give them to the North Koreans is absolutely unfair,” reads a comment to the petition.

On Wednesday, Pyongyang and Seoul agreed to field a united team under a single flag at the opening ceremony of the 2018 Winter Games in Pyeongchang.

This is not the first time two Korean states have tried to negotiate sending a unified team to the Olympics.

South and North Korean delegations marched together at the opening ceremony of the 2000 Sydney Olympics. They have marched together nine times ever since, including in Athens in 2004 the 2006 Winter Olympics and that Asian Winter Games of 2007.

In February 1991, Seoul and Pyongyang agreed to set up a joint table tennis squad the creation of the unified table tennis team to compete at that year’s World Table Tennis Championships. The unified team competed under the name Korea and used the Korean Unification Flag and the national flag.

The unified women’s team famously defeated the supposedly “invincible” Chinese team causing a big sensation on both sides of the divided border.