How Chinese Investment is Conquering Europe, Driving the US From the Market 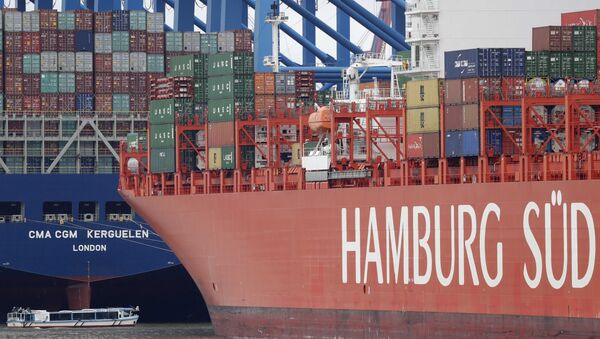 © AP Photo / Matthias Schrader
Subscribe
International
India
Africa
Chinese business is expanding its presence in the European market, as investors seek to take the leading role from their American counterparts. In recent years, Chinese investment in the European Union has surpassed $100 billion, including in infrastructure and other key sectors.

Not Only Sea Ports

In 2016, COSCO Shipping, which owns the world’s fourth-largest container shipping fleet, bough 51 percent of Greece’s biggest port in Piraeus for $342 million. The Chinese company won the bid over five rival companies, including the American investment company Cartesian Capital Group. The port’s new managing director, Fu Cheng Qiu, vowed to turn the port into one of the largest container hubs in the world.

The following year, COSCO went on to buy a majority stake in Spain’s Noatum Port Holdings for $244 million and 100 percent of the container terminal in the Belgian port of Zeebrugge for $42 million. Earlier, COSCO Pacific Ltd. bought 35 percent of the Euromax terminal in Rotterdam.

However, the most sensational deal was signed by China Communications Construction Company (CCCC) in July 2017. The company won the bid to build a new container terminal in Hamburg, one of Europe’s oldest ports. The Chinese consortium also owns Zhenhua Port Machinery Company (ZPMC), the world’s largest container machinery manufacturer. The new terminal in Hamburg will be able to accommodate ultra-large container vessels.

"In each of these deals, the Chinese companies were rivaled by companies with American capital. This indicates that the European market favors Chinese investment more than money from American companies," Dmitry Abzalov, director of the Center for Strategic Communication, a think-tank, told RIA Novosti.

In addition to sea ports, Chinese companies have been buying up other infrastructure facilities, including energy companies, power plants, chemical companies and airports.

In 2016, Chinese direct investment in the European market increased nearly 22 times, to €35 billion from €1.6 billion in 2010, surpassing a total of €100 billion over 16 years, according to data from the Berlin-based Mercator Institute for China Studies (MERICS).

China Reaches Breakthrough in Global Nuclear Market
In 2016, Chinese investors bought or bought shares in 309 European companies, including in Britain (23 percent), Germany (19 percent), Italy (13 percent), France (11 percent) and Finland (7 percent). However, the composition of Chinese investment in Europe has significantly changed in the past seven years; the influx of money into transport infrastructure has increased, as well as real property, the machine building industry and the automotive industry.

At the same time, direct investment from the US in EU countries has been shrinking in recent years, dropping below €100 billion in 2012 and then by another two percent in 2013.

"China is intensely building up its presence in Europe. This trend may not be very substantial for now due to the remaining dominance of American investors, but it cannot be ignored," said Alexei Portanskiy, a professor at the World Economy and International Affairs faculty of the National Research University Higher School of Economics.

In addition to buying up companies in the European market, Chinese companies have also taken niches vacated by American investors. This trend is the most visible in the IT-industry, where companies such as Microsoft, Google, Apple, Facebook and Amazon have been under pressure from European authorities, who intend to tighten their taxation policy. Their market shares have been filled by Chinese IT companies, such as Huawei which has increased sales of its smartphones and other products in European markets.

Many experts suggest that another major reason behind China’s economic expansion in Europe is the protectionist policy of the US President Donald Trump administration. His withdrawal from the Trans-Pacific Partnership (TPP) and the Paris climate agreement has resulted not only in decreased US involvement in global affairs but also prompted Beijing to take the leading role in these and other initiatives.

"After last year, Washington announced its withdrawal from the Paris climate deal and the other countries held talks to work out a common position on the issue. As a result, the agreement is still in force, but without the US, and China now plays the major role, Abzalov said.

His assumption was echoed by Portanskiy, who said that Trump’s policy is now resulting in protectionism, isolationism and leading to diminishing US involvement in projects and agreements initiated and developed under former President Barack Obama.

"The withdrawal from the TPP gave a fresh impetus to another global agreement, the Regional Comprehensive Economic Partnership (RCEP), which is backed by China and in which Beijing wants to play one of the leading roles," the analyst pointed out.

The RCEP agreement will probably be signed this year. In addition, Beijing has also intensified its efforts to establish a free-trade area in the Asia-Pacific.