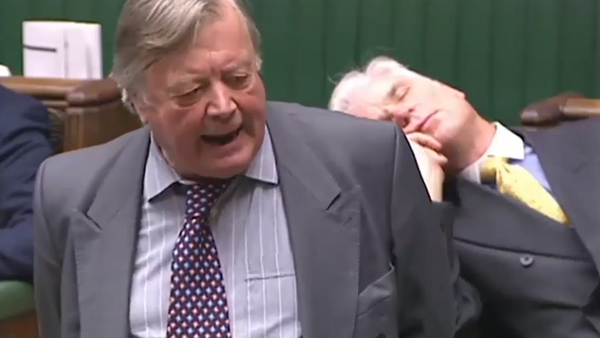 © Screenshot/Youtubia TV
Subscribe
On Tuesday, Desmond Swayne, a politician in the UK's House of Commons, made the mistake of falling asleep during a speech given by his colleague. The nap was broadcast on the Parliament's live TV feed.

Slowly slumping to his side, Swayne is seen in the recording catching a few zzz's just as Ken Clarke is telling fellow officials that he wasn't going to repeat certain remarks he'd made in the past.

​The officials were on the 11th day of debates regarding the Brexit bill, according to reports.

Defending his nap, Swayne said that he had had a "very long day" and called the ordeal "horrible."

"I dozed off for 30 seconds," the 61-year-old politician told BBC 5 Live. "That is the extent of it. It happened. It won't happen again."

Ahem, it was more like 42 seconds, bud. But who's counting?

Not wanting to make it seem like Clarke's speech was the cause of his snooze fest, Swanye explained that prior to the debate he'd gone for an early morning swim at Hyde Park's Serpentine Lake, which had tired him out.

"I was listening to Ken Clarke and I felt woozy," he added. "Then all of a sudden you have gone [to sleep] for 30 seconds. I am annoyed that I let it happen. It is embarrassing and annoying."

The following day, when it came time for Swayne to speak, he was met with a chorus of hoorays as John Becrow, speaker of the House of Commons, crowed that Swayne was "extremely awake."

​Swayne later took a dig at himself when he said, "a question keeps me awake at night," before asking UK Prime Minister Theresa May about her plans for British business.

As for Clarke, his feelings weren't hurt. He later told the BBC that he'd asked Swayne if he'd already had his morning cup of joe.