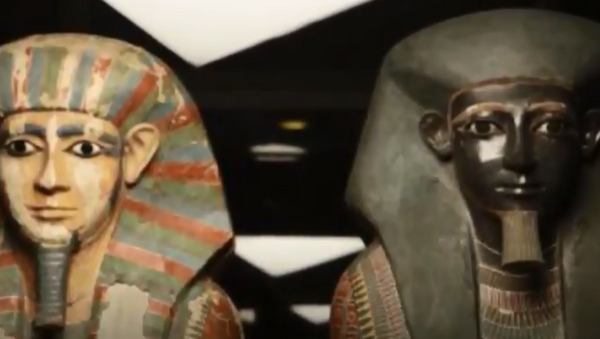 © Screenshot/IBTimes UK
Subscribe
International
India
Africa
A study published in the February Journal of Archaeological Science edition finds that a pair of ancient mummies known as the Two Brothers are actually not quite as close as previously thought.

Mummies Khnum-Nakht and Nakht-Ankh were initially found together by archaeologists in 1907 in a tomb near the Egyptian village of Rifeh. Since the two were in the same tomb, which dates back to the 12th Dynasty (1991-1802 BC), officials involved in the discovery gave the mummies the name Two Brothers.

However, when researchers at the UK's University of Manchester began to unwrap the finds a year later, they noticed some skeletal differences in the specimens which ultimately raised doubts about whether the two were really brothers.

​It wasn't just the differences in bone structure that raised questions, according to the study. Officials also found inscriptions on both coffins that indicated their mother was a woman named Khnum-Aa, and that they were the sons of an unnamed local governor. It was never clear whether the mummies' father was in fact the same local governor.

That wasn't all that left scientists scratching their heads. A 2014 study reported that the two mummies also had two different mitochondrial DNA, which suggested that either one or both of the mummies had no biological link to Khnum-Aa. In humans, mitochondrial DNA is solely inherited from the mother.

By 2015, researchers at the University of Manchester had had enough and wanted to get to the bottom of the Two Brothers mystery with their own DNA testing. It was after Konstantina Drosou, a study participant, took DNA samples from teeth belonging to the mummies that researchers were able to conclude that they indeed had the same mother, but not the same father.

"It was a long and exhausting journey to the results, but we are finally here," Drosou said in a statement Wednesday. "I am very grateful we were able to add a small but very important piece to the big history puzzle and I am sure the brothers would be very proud of us. These moments are what make us believe in ancient DNA."

Although Khnum-Nakht was 20 years younger than his brother, he was the first to die: Nakht-Ankh died six months after his baby brother, according to inked dates on bandages found inside the coffin. Officials later speculated in the study that since more care was taken in the burial process for Nakht-Ankh than Khnum-Nakht, the latter might have died unexpectedly.

As for the 2014 study, researchers argued that the conclusion wasn't accurate because officials used a method to extract DNA from liver and intestinal samples that is "susceptible to contamination with modern human and bacterial DNA."