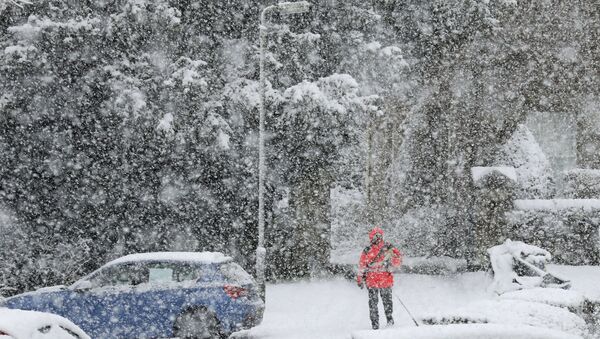 Hundreds of motorists were forced to sleep in their vehicles as a 'snow bomb' and freezing temperatures brought Scotland to a standstill as the country prepared itself for yet another Arctic storm blast.

Scores of schools and businesses across the country were forced to close on January 17, 2018, as the northern parts of Britain slithered to a halt in what has been described as the worst conditions in many years struck hard.

The main motorway link between Scotland and England, the M74, became impassable as a fleet of gritters struggled to keep the country on the move while train and ferry links were also seriously disrupted.

Scotland's transport minister Humza Yousaf said the weather was "extremely challenging" and nothing like it had been witnessed for a number of years as resources were being tested to the limit to cope with the horrendous conditions.

The @metoffice has now issued an Amber warning for snow across the South and South West of Scotland for tonight.

We will be communicating further instructions but clearly the areas covered by the Amber warning should be avoided unless necessary — there will be disruption. https://t.co/xevtfOMhzi

An area of low pressure will cross the UK overnight. This will bring up to 20cm of #snow for some, and #winds as strong as 70mph for others. AMBER and YELLOW warnings have been issued, stay #weatheraware pic.twitter.com/wuubBr4EeS

​​As the Met Office issued another amber warning for further snowfalls on January 18, Mr. Yousaf said everything possible was being done to ensure resources are in strategic locations to try and keep Scotland on the move. A number of local authorities have revealed, however, they have already overspent on their winter budgets sparking widespread fears of cuts to services.

In the Highlands, 15,000 children were sent home after 17 secondary schools, 75 primary schools, 54 nurseries and two special schools were forced to close because of the extreme weather conditions. Similarly, Dumfries and Galloway has also given around  4,000 pupils at 26 schools two days off as staff struggled to get to their work.

Drivers warned and dozens of schools closed in the Highlands and Dumfries and Galloway due to #snow https://t.co/2RwH6dQW9F Jo pic.twitter.com/caUwZf9LVw

Hundreds of homes and businesses across Scotland were also left without power as heavy snowfalls brought overhead energy lines crashing to the ground. Scottish Power has issued a warning about more potential trouble to its network in the coming hours as engineers work around the clock to restore energy and heating.

Businessman Nic Read was one of hundreds of drivers forced to sleep in their cars after becoming stuck on the M74 for more than 16 hours during the snow hell. "I was stuck for 16 hours in total, 12 hours in one spot and four hours in another. I tried to sleep in my car but there were patches of vehicles coming northbound and as soon as cars came up the headlights would wake you up," he said.

"When you turn the engine on you're also wondering how much longer will my fuel last. How much heat can I afford to put on. It was quite stressful for everybody," the businessman added, saying hundreds of other people were forced to sleep in their vehicles as well.."

Watch out on the roads tonight as the snowy/icy conditions continue into tomorrow. Keep an eye on @trafficscotland before setting out on your journeys and make sure you're prepared. More info via our website https://t.co/OA2auiPIPG pic.twitter.com/S6ptJS85r8

Police Scotland has also issued a warning to drivers not to travel on 17 January fearing further blizzard conditions across the south-west of Scotland, Lothian, Borders and Strathclyde areas.