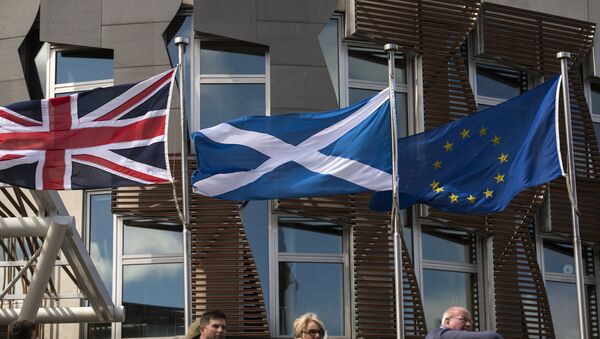 Ruth Davidson has previously campaigned vigorously against any re-run of the 2014 Scottish Independence Referendum.

The Conservative Party leader in Scotland, Ruth Davidson demanded on January 16 that executive powers returning to the United Kingdom after it leaves the European Union in 2019 should be exercised by the Scottish Government in Edinburgh and not in Westminster.

Ms. Davidson, who has been touted by some as a potential future leader of the national Conservative Party, made the demands reported in the Scottish press despite her fierce campaigning against the holding of a second independence referendum for Scotland, a so-called "IndyRef2."

The Scottish Conservative leader's comments however also seem to put her and the country's First Minister Nicola Sturgeon on the same page when it comes to increasing the executive powers of the Scottish Government. 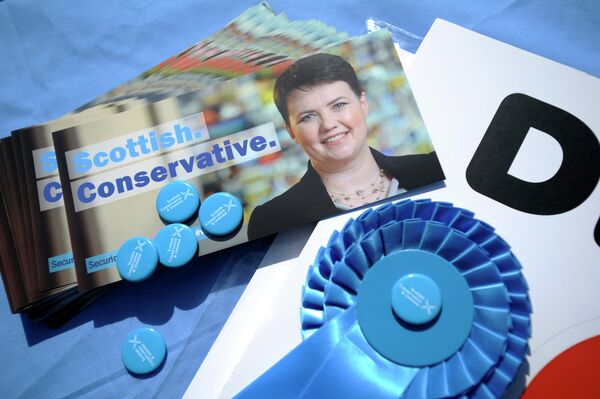 Canvassing materials showing the face of Ruth Davidson, leader of the Scottish Conservatives, are pictured as she campaigns for the UK general election in the centre of Edinburgh on April 23, 2015
© AFP 2022 / Andy Buchanan

The Scottish public rejected outright independence in 2014 by a 55 percent to 45 percent margin. Recent polling has not shown a majority of Scots warming to the idea of a second such vote, despite Nicola Sturgeon insisting that Scotland being taken out of the EU against its will due to the Brexit vote has made another independence referendum a live option.

Currently the powers residing in Brussels give it influence over Scottish agricultural policies such as the regulation of fertilizer, genetically modified crops and animal welfare, in addition to environmental quality standards and standards on criminal justice.

Many of the powers currently exercised over Scottish policy from Brussels were published by the country's First Minister Nicola Sturgeon in 2016 claiming that Brexit would result in London exerting greater control over Scottish affairs as a result. Ms. Sturgeon demanded that the future of these executive powers be determined prior to the UK's departure from the EU so as to avoid a constitutional crisis.

Devolution, the bestowing of executive powers by the London Government to Scotland's national assembly in Edinburgh, has along with the question of Independence been a fraught and divisive issue.

The 1979 referendum to enact the "Scotland Act" or 1978 to create a devolved Parliament for the country was initially successful, garnering 51.62 percent of the vote. However, because those voting affirmatively represented under 40 percent of the eligible electorate the Act was abandoned.

It would not be until 1998 that the Scottish Parliament was brought into being, with powers over taxation by the results of a second referendum which this time achieved 74.29 percent of the vote.