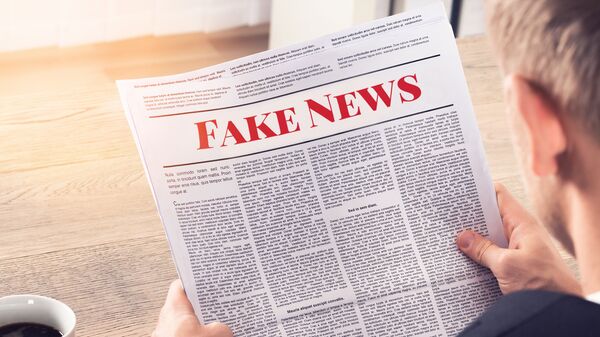 CC BY 2.0 / Mike MacKenzie / Fake News - Person Reading Fake News Article
Subscribe
International
India
Africa
The European Commission is preparing a strategy to counter fake news, which will be published this spring, European Commissioner for the Security Union Julian King said during a debate at the EU Parliament on Wednesday.

"There's been a focus on a wider phenomenon of fake news. It's one of the European Commission’s priorities for the coming year… In November last year, we established a high-level expert group which has now started its work to advise the commission on scooping the phenomenon … and presenting recommendations. It will contribute to the preparation of a strategy addressing the challenge of fake news, which we'll issue in spring this year," King said at the European Parliament's debates entitled "Russia — the influence of propaganda on EU countries."

According to King, there was little doubt that pro-Kremlin disinformation campaign was an orchestrated strategy aimed at spreading disinformation in various languages and through various channels.

Neocon Think Tanks Not Russian Media Are the Enemy Within
"Russian disinformation can be extremely successful. So that's why we need to redouble efforts to debunk this propaganda," King stressed.

However, current EU polices on countering fake news and propaganda are focused on Russian media exclusively, with some other outlets like Fox News and Al Jazeera not being under the radar, the European Parliament member from the Group of the Progressive Alliance of Socialists and Democrats, Tanja Fajon, said on Wednesday.

"I agree that monitoring the impact of the media on the politics in society is necessary … but I have a few critical remarks. Firstly, why are we dealing only with Russian propaganda, how do we view the news on the American Fox News, do we have a problem with the stakes of the US media corporations in EU media outlets whose views are reported by Al Jazeera? And if we remain in Europe, how do we feel about the national media owned by a political party members and related persons, in Slovenia we have such a media outlet," Fajon said during a debate at the EU Parliament dubbed "Russia — the influence of propaganda on EU countries."

Russia
Fake News Alert: The Independent Accidentally 'Kills' 8,000 Russians
She added that RT broadcaster and Sputnik news agency perhaps should been seen as an attempt of Russia to find its place in the media world, which had long been dominated by the West.

Meanwhile, several other lawmakers also pointed at the hypocrisy of the European Parliament. Joerg Meuthen from the Alternative for Germany (AfD) party noted that the term "fake news" was often used to discredit unwanted facts and opinions.

"Today's debate about alleged election influence by Russian fake news is for the established European parties like Easter and Christmas at once … This is pure hypocrisy, since this Parliament will lead an election campaign in pure self-interest in the 2019 European elections. The self-supporting slogans of EU officials and campaigners will produce their own truths, which will be propaganda of the best calibre. Anyone who acts like that has no right to complain about alleged election interferences by Russia. You are sitting in a glasshouse here in Strasburg, you should therefore not throw stones," Meuthen warned.

Leader of the UK Independence Party (UKIP) in Scotland, David Coburn, stressed that it was the European Union that spent millions in propaganda to prevent Brexit, and that was destroying impartiality or credibility of this debate about alleged Russian influence.

"The EU is still doing it by setting up the Orwellian machine to push the EU project and subvert national democracies, in its own words, 'challenging Euroscepticism.' It is pure Soviet 'Pravda' [newspaper]. I am more concerned with EU propaganda than with their clunky Russian version," he said. Moreover, Coburn recalled that RT broadcaster gave the UKIP an opportunity to voice its position when they could not get on the BBC.

"Good luck with launching Europe Today. Ask colleagues from Ukraine Today for good advice – they shut within a matter of two years," she was quoted as saying by the RT website.

Earlier in the day, European lawmakers urged EU executive authorities to shore up "counter-propaganda" efforts by an extra million euros and set up Europe Today to counteract what they deem Russian propaganda.

However, In case of pressure on the Russian media by the European Union, Moscow will immediately take retaliatory measures similar to those introduced against Washington after the oppression of RT America and Sputnik in the United States, member of the Russian parliament's upper house's commission on the protection of state sovereignty Viktor Ozerov told Sputnik.

"If someone in Europe learns nothing from the tit for tat measures adopted in Russia after the oppression of RT and Sputnik in the United States, if they are ready to make the same mistake, our reaction will be immediate," Ozerov said on Wednesday.

According to the lawmaker, such actions of the European lawmakers demonstrate the desire of EU authorities to restrict freedom of speech and the press, despite their statements about the protection of these values.

"There is a real information war against Russia in the European Union. Apparently, they want to discredit Russian authorities by their counterpropaganda, and, of course, it is interference in our internal affairs," Ozerov said.

Tired of Fake News? Washington Post Publishes Fake History of Soviet Union
Russia will also oppose such a policy by raising the qualification of Russian journalists, as well as by informing about the real picture of what is happening, including on international parliamentary platforms, senior lawmker added.

Russia’s perceived influence on European audiences has been a hot topic in Europe amid elections. In November 2016, the European Parliament adopted a resolution accusing Russia of waging an "information war" against the 28-nation bloc. Russian President Vladimir Putin said the vote showed how the idea of democracy was eroding in the West.

Western politicians have repeatedly accused Kremlin in orchestrating disinformation and propaganda campaigns and spoke about threats allegedly posed by Russian media. Moscow has repeatedly dismissed all of such allegations.

In November 2016, the European Parliament adopted a Polish-initiated resolution which declared that Russia was waging an "information war" against the European Union and claimed the need to "fight" Russian "disinformation." Commenting on that decision, Russian President Vladimir Putin stated that the adoption of the resolution demonstrated the degradation of the perception of democracy in the European society and expressed hope that common sense would prevail.

Russia
Putin Orders Russian Justice Ministry to Keep a Register of Foreign Agent Media
Since then, the European External Action Service East Stratcom Task Force, set up in 2015, has secured over $1 million in funding and published multiple articles "debunking" alleged cases of "disinformation" by Russian outlets. A lot of these cases appeared to "debunk" news pieces reporting about opinionated remarks by Russian officials and overblown tabloid headlines.

Earlier, RT America had to register under the Foreign Agents Registration Act (FARA) and later lost accreditation in the US Congress. At the same time, other foreign state-owned media outlets in the United States, such as the United Kingdom’s BBC, China’s CCTV, Germany’s Deutsche Welle and others, have not been requested to register under the FARA. RT and Sputnik Editor-in-Chief Margarita Simonyan said that the demand to register was discriminatory and contradictory to the principles of democracy and freedom of speech, adding that it barred RT from equal competition with foreign broadcasters that were not made to register as foreign agents in the United States.