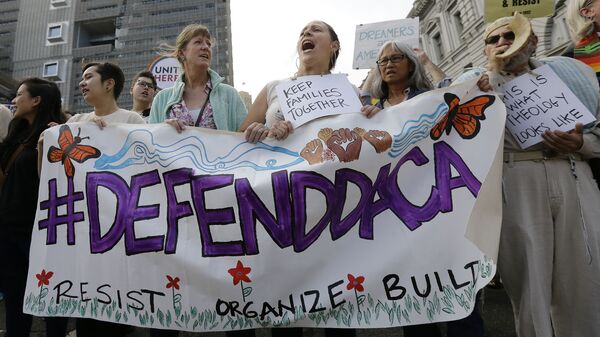 © AP Photo / Jeff Chiu
Subscribe
International
India
Africa
On Friday, US lawmakers will have until midnight to shake on a deal that would prevent a government shutdown, but before anything can be confirmed, officials will have to come to terms with what's going to happen to hundreds of thousands of undocumented immigrants in the country.

And despite US President Donald Trump's insistence that it's Democrats who are holding back on an immigration deal, that's not so, says Juan José Gutiérrez, executive director of the Full Rights for Immigrants Coalition.

​Speaking to Radio Sputnik's Loud & Clear, Gutiérrez says that Trump's earlier statements on "sh*thole countries" and wanting more immigrants from Norway "is the clearest indication that [the Deferred Action for Childhood Arrivals program] is in very serious trouble."

"That statement by US President Donald Trump… should be taken very, very seriously," the coalition director said. "This administration… is a racist, fascist government that will not have any consideration for any undocumented person regardless of whether they're adults or were brought in as children and have had legal protection under the DACA program."

Chiming in on the discussion, Bryan MacCormack, executive director of the Columbia County Sanctuary Movement, added that the issue of immigrant communities being targeted is really nothing new in the Land of the Free.

"This isn't something that's brand new for communities of color, especially the immigration crisis," MacCormack told show hosts Brian Becker and John Kiriakou. "The immigration movement has been working for decades here in this country, but it is only now that the general public is waking up to the call that they've been making about this deportation machine that has been built over the last decade."

"What we really need to do is return to those communities who have been putting out those signals for so long about what's been going on and start strategizing about how we're going to build a networked resistance movement," MacCormack added.

For Gutiérrez, however, the conversation that's been building around DACA and undocumented immigrants is a signal that "we need to have our collective voice heard."

"Not just in the US but across the world," he said. "We have to make the point that human rights are being violated on a daily basis against immigrants on an unprecedented and mass scale."

The DACA program, which was an executive order signed by former President Barack Obama in 2012 to offer a conditional green card status to undocumented immigrants, is scheduled to end on March 6, 2018. If officials fail to come to a decision on the matter prior to the cutoff date, thousands of recipients will become eligible for deportation.