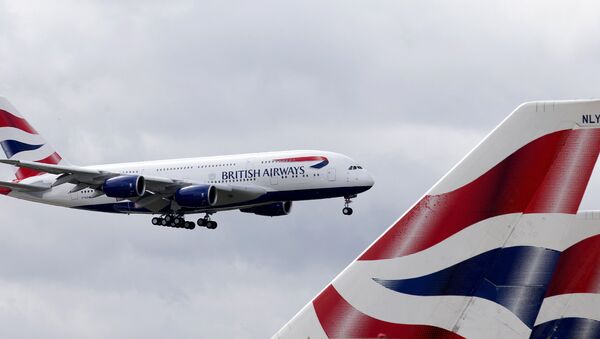 © AFP 2022 / JUSTIN TALLIS
Subscribe
Ryan Carney Williams, who goes by the name Ryan Hawaii, was turned away from a British Airways flight from Iceland to London on Wednesday after he wore eight pairs of pants and 10 shirts to the gate to avoid paying a $124 excess baggage fee because he reportedly didn’t have any money left.

Hawaii was denied a boarding pass by the airline at Keflavik airport after he put on all the clothes that wouldn't fit in his checked baggage.

Following the incident, Hawaii tweeted, "@British_Airways hi being held at Iceland Keflavik airport because I had no baggage put all the clothes on and they still won't let me on. Racial profiling?"

In a 15-second video posted on Twitter, Hawaii is heard saying to a staff member, "Can you explain why I can't get on the flight?" Security officers can he heard telling him to turn off the camera and asking, "Do we need to call the police?"

"I waited in the queue politely with other passengers and once I made it to the desk I was still refused my boarding pass," Hawaii told the Telegraph.

"Security were called. At this point I started to film. Security tried to slap my phone out my hand. I moved. Continued to film and explain that I was well within my rights. Police were called. I spoke to two police officers and explained my story," he added.

According to the British Airways spokeswoman, "The decision to deny boarding was absolutely not based on race. We do not tolerate threatening or abusive behavior from any customer and will always take the appropriate action."

However, the debacle didn't end there. The next day, Hawaii was not allowed to board another flight with EasyJet."And AGAIN! Refused from 2 flights in 2 days for no valid reason," he tweeted.

Hawaii tweeted a private response from EasyJet, explaining why he was not allowed to board their flight.

"The captain for your EasyJet flight was made aware of what happened the previous day. Because of this, the captain took the decision to offload you," the message said.

Though the message stated that Hawaii could not be offered a refund for his flight, he did receive one.

Hawaii eventually made it home after taking a Norwegian airline flight.

This is not the first time that a passenger has tried to evade baggage fees by wearing multiple layers of clothing. In 2015, James McElvar, a singer with Scottish boy band Rewind, fainted on a flight from Glasgow to London after wearing 12 layers of clothing to avoid check-in fees.