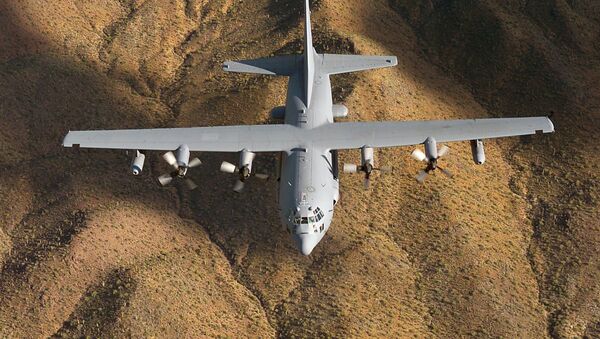 According to reports Monday, the US' EC-130H Compass Call aircraft, which is capable of issuing a denial of service attack an enemy plane's communication abilities, was deployed to South Korea's Osan Air Force Base January 4.

Though it's unclear why the state-of-the-art tactical aircraft was deployed to the base, some critics have speculated that it may be used to collect data on North Korea's military during the 2018 Olympic Games set to begin February 9.

Per the US Air Force, the Compass Call is a "tactical weapon system" that can use "noise jamming to disrupt enemy command and control communications and deny time-critical adversary coordination essential for enemy force management."

Based at Arizona's Davis-Monthan Air Force Base, the aircraft reportedly made its way to South Korea after stopping off at Japan's Yokota Air Base, KBS World Radio reported. There are only 13 other EC-130Hs active in the US Air Force.

The aircraft has previously been used to keep Daesh fighters from coordinating attacks.

"If we can shut down or deny their communication," Lt. Col. Chris Weaton of the Electronic Combat Squadron said in a statement, "then we are causing chaos."

This chaos, Weaton says, gives US forces a chance to take advantage of the scramble and carry out their own attacks. An estimated four of the US' 13 EC-130Hs are operating in Iraq and Syria, Business Insider reported.