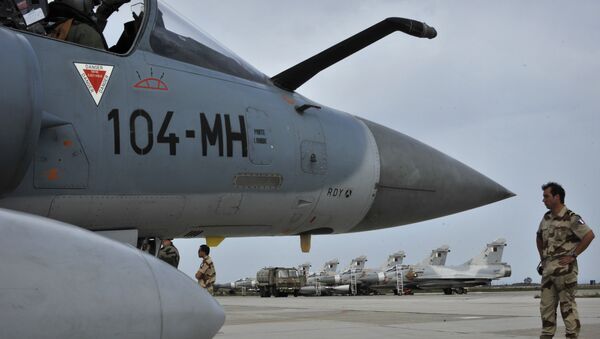 The United Arab Emirates’ government is planning to file a complaint with an international aviation group following two incidents in which Qatari jets “intercepted” Emirati passenger aircraft, according to a Tuesday announcement.

"Today we will file our complaint to the International Civil Aviation Organization about the two serious incidents," the head of the UAE's civil aviation body told AFP. The UAE government will "ask for the intervention of the council to stop Qatar from repeating the act," the aviation authority chief said.

The Qatari government rejected the accusation as "completely false."

"The State of Qatar announces that the claims of Qatari fighter planes intercepting a UAE civil aviation aircraft is completely false," the Qatari Foreign Ministry said via Twitter on Monday, shortly after a UAE state-run news agency reported the interception earlier in the day.

A spokesman for FlightRadar24, an aircraft-tracking website, told the Associated Press "there appears to be no deviation from standard routing and approach patterns."

A spokesman for the US Air Force Central Command's al-Udeid Air Base in Qatar, meanwhile, said it did not receive any reports of incidents involving commercial aircraft in the region, but that the US does not actively monitor the operations of Qatar's air force.
The governments of Qatar and Saudi Arabia, the UAE, Bahrain and Egypt have been engulfed in a diplomatic crisis since last June and it shows few signs of abating.

Since neither the Qatari nor Saudi, Egyptian, Emirati or Bahraini sides are "interested in a compromise," the alleged airline interception is concerning, Hani Sabra, founder of Alef Advisory in New York, told Bloomberg.

"The hardline positions of the parties means the chance of accidents is always present," Sabra noted.

Meanwhile, Qatari Sheikh Abdullah bin Ali al-Thani, a member of the royal family, said in a video statement over the weekend he was being held "prisoner" in the UAE after being invited as a guest. But a UAE foreign ministry official denied the charge. A source in the UAE Foreign Ministry told the country's official WAM news agency that al-Thani "expressed his desire to leave the UAE and was provided with all help needed to facilitate his departure from the UAE."

In light of this development, the Qatari communications office announced late Monday that the alleged plane interception was a ploy to "draw attention from other incidents that have caused media crises" for Abu Dhabi in recent days.

The coalition led by Riyadh has severed diplomatic, trade and transportation links with Qatar, which has since sought closer ties with Iran. Shortly after the crisis started, Iran's President Hassan Rouhani stated, "Tehran will stand by Qatar's government." By August 23, Qatar stated it would send its ambassador back to Iran, following a conversation between the Qatari and Iranian foreign ministers that resulted in discussing "means of boosting and developing" bilateral relations, the Qatari Foreign Ministry said at the time. Qatar and Iran share rights to a massive offshore natural gas field.

Turkey has also supported Qatar throughout the diplomatic dispute.

US President Donald Trump spoke with Qatari head of state Emir Tamim bin Hamad al-Thani on Monday. The US leader "reiterated his support for a strong, unified Gulf Cooperation Council that is focused on countering regional threats," the White House said. Trump also thanked "the emir for Qatari action to counter terrorism and extremism in all forms, including being one of the few countries to move forward on a bilateral memorandum of understanding," the White House statement added.