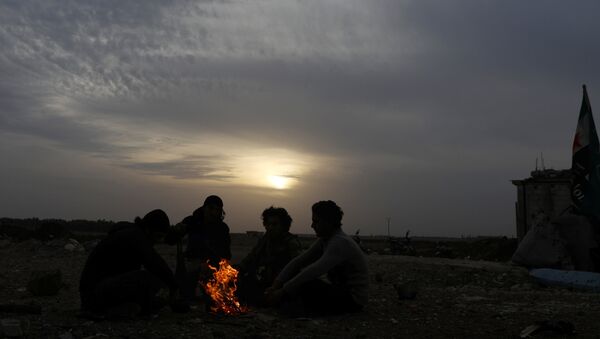 Mustafa Sejari, a senior representative of the Free Syrian Army (FSA) said that the group’s envoys who visited Washington explained to US officials the downsides of President Donald Trump’s decision to shut off the CIA-facilitated supply of weapons to certain rebel groups in Syria.

"We asked for the resumption of aid and explained the dangers of leaving moderate FSA forces without support," Sejari said.

Russian Journalists Blow Lid Off Alleged US Terrorist Training Network in Syria
According to him, these measures would be necessary to fulfil Trump’s intent to “confront Iranian hegemony in the region” and to curtail the activities of “the Iranian militias that are expanding without serious resistance.”

"With every US statement about the need to confront Iran's influence, Iran has been expanding in Syria while moderate forces that are backed by Washington see aid being dried up and are weakened," the FSA representative complained.

Sejari added that the FSA delegation included recipients of the CIA-led program in question, launched in 2013 and used to supply money, weapons and instructors to select rebel groups opposing the government of Syrian President Bashar Assad.

The CIA came under fire in March 2016 when a CIA-backed rebel group based in northern Syria was attacked by the Pentagon-backed, Kurdish-dominated Syrian Democratic Forces.

Earlier, in 2015, it was admitted that a large proportion of the weaponry originally intended for 'moderate' rebels eventually found its way into the hands of the internationally-condemned terrorist groups Al Nusra and Daesh, either due to FSA defections or their sale on the black market.

000000
Popular comments
The FSA only wants to perpetuate the war - they make a living that as mercenaries. Iran's expanding influence is a pretext covering that the Iran only went there because the US backed Sunni threatened the Shiite holy sites. Iran's militias will demilitarise once the danger is over. As Putin put it - "war costs money". Men at arms are simply not productive. p.s. Only a nation the prints money to pay for goods and a big army to sent abroad has a soldiers that earn something. All others pay for this nation.
sterndaler
16 January 2018, 11:19 GMT1
000000
sterndaler, The only way around this is to not use the us$..If all those countries stopped using the dollar and avoided american made or retailed (made in China for an american company) then things would quickly come to a head
tonyw247
16 January 2018, 12:03 GMT
000000
Newsfeed
0
New firstOld first
loader
LIVE
Заголовок открываемого материала
Access to the chat has been blocked for violating the rules . You will be able to participate again through:∞. If you do not agree with the blocking, please use the feedback form
The discussion is closed. You can participate in the discussion within 24 hours after the publication of the article.
To participate in the discussion
log in or register
loader
Chats
Заголовок открываемого материала
Worldwide
InternationalEnglishEnglishMundoEspañolSpanish
Europe
DeutschlandDeutschGermanFranceFrançaisFrenchΕλλάδαΕλληνικάGreekItaliaItalianoItalianČeská republikaČeštinaCzechPolskaPolskiPolishСрбиjаСрпскиSerbianLatvijaLatviešuLatvianLietuvaLietuviųLithuanianMoldovaMoldoveneascăMoldavianБеларусьБеларускiBelarusian
Transcaucasia
ԱրմենիաՀայերենArmenianАҧсныАҧсышәалаAbkhazХуссар ИрыстонИронауОssetianსაქართველოქართულიGeorgianAzərbaycanАzərbaycancaAzerbaijani
Middle East
Sputnik عربيArabicArabicTürkiyeTürkçeTurkishSputnik ایرانPersianPersianSputnik افغانستانDariDari
Central Asia
ҚазақстанҚазақ тіліKazakhКыргызстанКыргызчаKyrgyzOʻzbekistonЎзбекчаUzbekТоҷикистонТоҷикӣTajik
East & Southeast Asia
Việt NamTiếng ViệtVietnamese日本日本語Japanese中国中文Chinese
South America
BrasilPortuguêsPortuguese
NewsfeedBreaking
22:22 GMTCNN Fires Chris Cuomo Over His Efforts to Help Brother With Sexual Harassment Claims
22:15 GMTUS Democracy in Trouble? Half of Young Americans Polled Agree
22:01 GMTSuper-Union Leader Explains Donation Cut-Off to Cash-Strapped Labour Party
21:31 GMTFlight From Tel Aviv to Moscow Changed Flight Level Due to NATO Spy Plane - Air Authority
21:18 GMTPolice: Parents of Suspected Michigan School Shooter Had Help Hiding in Detroit Warehouse
19:54 GMTKiev Seizure, Donbas Advance: German Tabloid Sources Fantasize Russian Invasion of Ukraine
19:14 GMTTurkish Authorities Uncover Explosive Device on Police Car Assigned to Erdogan Rally
17:46 GMTBlast Heard Over Iran's Natanz, Where Nuclear Facility Located
17:32 GMTSouth African Province at Centre of Omicron COVID Variant Sees More Children in Hospital
16:54 GMTPolish Prime Minister Orders Cybesecurity Alert Ahead of UN Forum
16:52 GMTGreek Prime Minister Assures Vatican That Condition of Migrants in Greece Improved
16:21 GMTUS Warns of ‘Terrible Consequences’ of Possible Chinese Invasion of Taiwan
16:14 GMT‘Killer Robots’ Threat Persists as US Unwilling to Discuss Ban on Lethal Autonomous Weapons Systems
16:00 GMTLionel Messi Reveals He 'Never' Wanted to Become Best Football Player
15:39 GMTPutin, Biden Will Hold a Video Call on Tuesday Evening
15:36 GMTGiant Christmas Tree Set Up Near Church of the Nativity in Bethlehem
14:52 GMTParty Like It's 1939: German Chancellor's Send-Off Compared to Nazi Rally
14:48 GMTParents of Michigan School Shooter Suspect Plead Not Guilty to Involuntary Manslaughter Charges
14:26 GMTFrance's Republicans Party Picks Valerie Pecresse as Presidential Candidate
14:10 GMTOne of Critical Race Theory Founders Says He's Been Receiving Voicemails 'Full of Venom' for Months