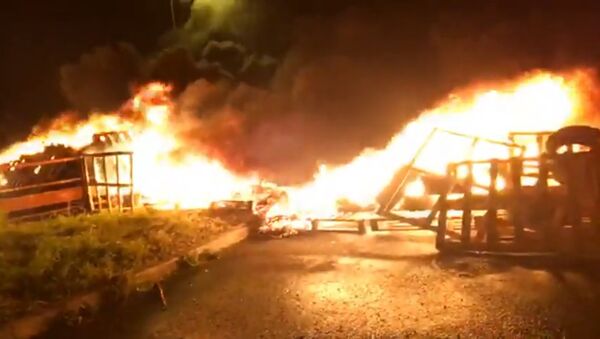 About a hundred prison workers gathered at the Fleury-Merogis Prison in the suburbs of Paris on Monday night, protesting last week's assault on guards at the Vendin-le-Vieil prison in northern France, which saw three guards injured in a scissor attack by an Islamist militant.

A Sputnik France correspondent was at the scene, showing a group of men, many of them wearing Union Federale Autonome Penitentiare (UFAP) vests, linking arms, shouting and chanting slogans as riot police made use of smoke grenades.

Monday's protests were one of dozens being staged across the country, with officials estimating that about half of France's 188 prisons have been affected by demonstrations.

A UFAP union representative told Sputnik France that French prisons "have a major problem with security."

"If we're talking specifically about the Fleury-Merogis prison…today a single guard is responsible for 90 prisoners. Add to this the new issue of Islamist terrorists who we have been asked to supervise." 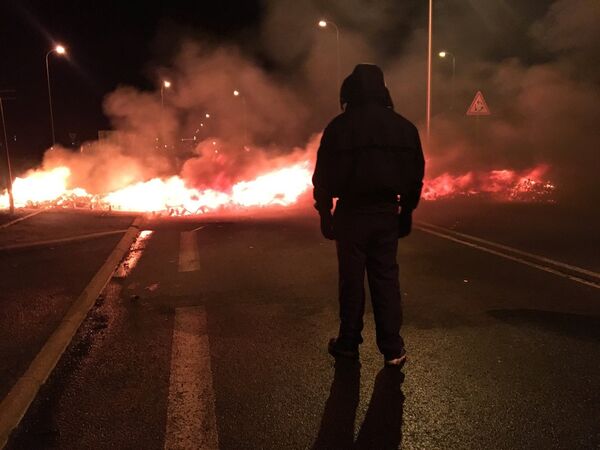 The rep explained that with rare exceptions, the terrorists are simply mixed with the ordinary criminal population, and that the Islamists' designation as 'radicalized' is essentially meaningless when guards are tasked with handling nearly a hundred other inmates.

The rep added that his men are prepared for clashes with police, and were determined to hold their ground in an effort to get their grievances across.

Last week, Christian Ganczarski, an ethnic Pole German national and former member of al-Qaeda, stabbed three guards with scissors as he was being transferred out of solitary confinement at the Vendin-le-Vieil high security prison in northern France, about 200 km north of Paris. Ganczarski, serving an 18-year sentence for his role in the Djerba synagogue bombing, faces extradition to the United States on charges related to the 9/11 terror attacks once he completes his sentence in France.

The Vendin-le-Vieil prison's director resigned Monday amid protests over French prisons' insufficient staff and resources to contain the criminal population, including the highly dangerous Islamist inmates. Guards' unions have accused authorities of failing to deal with upwards of 4,000 recently recorded cases of violence against guards. President Emmanual Macron promised to come up with an action plan to deal with the situation next month, and to go beyond his election pledge of 15,000 new prison cells. 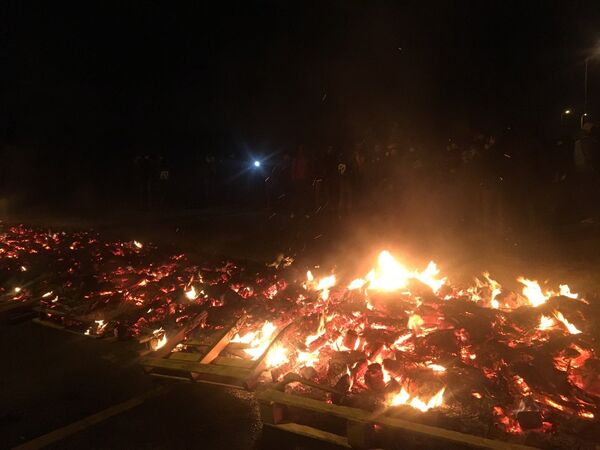 Remnants of the wooden pallets burned by prison guards at Fleury-Mérogis during their protest over the violence committed against guards by an Islamist radical at the Vendin-Le-Vieil jail.
© Sputnik