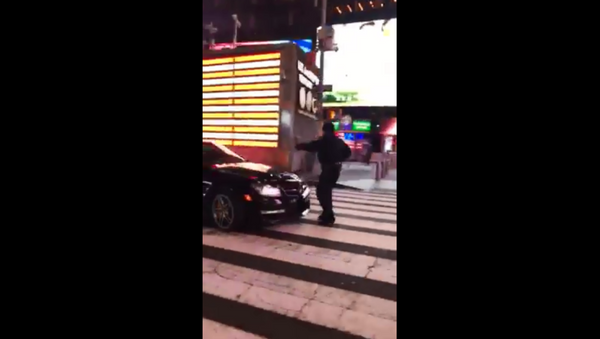 © Screenshot/Kiefer Dixon via Jeffery Watt
Subscribe
International
India
Africa
On Saturday, tourists and locals hanging about New York's Times Square were given a show they're likely to never forget after a driver, zooming through the busy streets, dragged a New York Police officer on their car.

The incident, which took place in front of the NYPD substation on West 43rd Street, was caught on film by Kiefer Dixon, who was "filming nice cars" when the series of events took place.

Though the video begins with a Mercedes-AMG C63 sedan doing a burnout, the situation takes a turn for the worse when 26-year-old Ian Wallace, an NYPD officer, jumps onto the scene to apprehend the driver, the New York Post reported.

Rather than following Wallace's commands, the driver instead swerves away and splits from the scene after the officer reached for his pistol.

In the driver's attempt to get away, Wallace is seen being dragged by the car for a split second after grabbing ahold of the car's hood. After letting go, Wallace, undeterred, and a group of officers begin to sprint the gritty streets of NYC to catch up with the vehicle.

"Get out of the way!" an officer is heard yelling while running with his gun drawn. "Get that car! Get the car!"

Seconds later, a collective "oh" is heard from nearby spectators and commuters.

Offering commentary on the matter, Dixon, who was filming the incident while riding on his longboard, says, "my son just side-swiped all these cars."

And just like that, the trickster driver was nowhere to be found.

The Post later reported that Wallace was taken to the hospital with minor injuries to his back, arms, right leg and right hip.

Though critics have clearly indicated that the driver was in the wrong, Dixon later told the Post that the Benz owner never had any intention of hitting the officer.

"He tried to get around the cop. I was right there," Dixon told the Post. "Before the cop even ended up on the side of the car, the cop had his gun out. So now he's got a cop on his hood with his gun drawn… my thinking? The guy was trying to get the hell outta there."

"I'm looking at the cop like, what he did was very stupid and very dangerous. When he fell, his gun could have gone off and he could have hit somebody."

In the three days since the clash, officials have yet to find the driver.