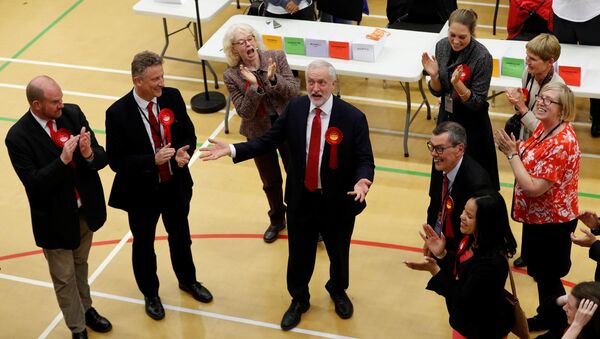 © REUTERS / Darren Staples
Subscribe
Results for the National Executive Committee elections were announced January 15 after voting closed on January 12. Sputnik looks at the figures of the elections.

Supporters of Labour Leader Jeremy Corbyn have swept elections for the party's National Executive Committee (NEC) elections in which the largest share of the vote, 68,388 went to an activist and former multi-faith prison chaplain, Yasmine Dar. Labour member and activist of at least 20 years Rachel Garnham came in third place with 62,982 votes.

Result of the ballot for National Executive Committee https://t.co/c7w6R9mvS4

In second place and among those closest to Mr. Corbyn was Jon Lansman, a co-founder of the grass-roots Labour campaign group Momentum who came in with 65,163 votes. Mr. Lansman ran Jeremy Corbyn's initial campaign to seize leadership of the Labour Party in 2015. A political operator since the 1980s, Lansman ran the campaign of Tony Benn for the deputy leadership of the party in 1981 and has since been associated with the "Bennite wing" of the Labour movement characterized by socialism and opposition to the European Union.

In his campaign, Mr. Lansman said he intended to use his new position on the NEC change how the Labour Party operates, to make it more grass-roots and democratic.

READ MORE: Corbyn Disavowal of US 'Special Relationship' 'Statement of the Obvious' — Prof.

Another notable name on the ballot was that of the highly flamboyant media personality and actor Eddy Izzard who garnered fourth place in the results with around 39,500 votes. The turnout of party supporters for the vote was reported to have been low.

The Labour faction, commonly referred to as "Blairites," which has been dominant since the late 1990s has seen its grip on the party slip since Mr. Corbyn's successful leadership bid in September 2015 and have used the pretext of several issues to attempt to unseat him. In particular the Blairite "old guard" attacked Corbyn for what they considered his insufficient support for the Remain campaign in the EU membership referendum of 2016 as well as his refusal to back a second referendum on EU membership.