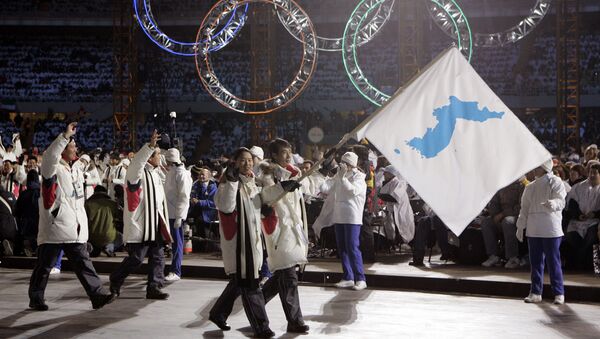 TOKYO (Sputnik) – The athletes from North Korea and South Korea may march under the so-called Unification Flag during the Opening Ceremony of the upcoming Winter Olympics in the South's Pyeongchang, if Seoul and Pyongyang reach the relevant agreement, Do Jongwhan, South Korea’s minister of Culture, Sports and Tourism, said on Monday.

Earlier in the day, South Korea’s Unification Ministry said in a statement that a working-level meeting between Seoul and Pyongyang on the latter's participation in the upcoming Winter would be held on Wednesday.

"The discussions are still underway. However, in case the agreement is reached on marching together, the Unification Flag will be raised … We have marched together [with North Korea] around nine years ago. Reaching peace on the Korean peninsula through sports is what the Olympics are aimed at," Do said, as quoted by South Korea’s Yonhap news agency.

The Unification Flag is an unofficial flag used to represent athletes from South Korean and North Korea as one team in sporting events. The flag was used for the first time when the two countries competed as a joint team in the 1991 World Table Tennis Championships in Japan and the World Youth Football Championship in Portugal.

​Last time, the two countries marched together at the Opening Ceremony in Turin in 2006. However, the athletes representing Seoul and Pyongyang did not participate in this contest as one team.

On Saturday, the meeting of the International Olympic Committee (IOC) devoted to the same issue is scheduled to be held. The possibility of the participation of joint teams formed by athletes from South Korea and North Korea will reportedly be on the meeting's agenda.

On December 9, Seoul and Pyongyang agreed that North Korean athletes would participate in the upcoming winter Olympics, scheduled for February 9 to 25.