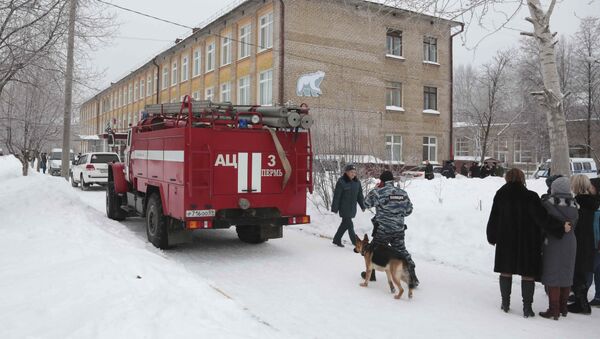 Eight students and a teacher received knife wounds in an attack carried out by two masked individuals in a school in Russia's city of Perm, the press secretary of the regional security ministry, Elena Dubinina, told Sputnik on Monday.

The number of those injured in the knife fight in a school in the Russian city of Perm has risen to 12, including 11 children, the regional police said.

"Two minors, one of whom is a student, the second is a former student of the school, had a conflict with the use of knives. Eleven minors and one teacher received cut wounds," the police said, adding that one of the fight participants had been registered in a psychoneurological clinic.

The teacher and one of the students who was injured by the two unknown attackers at the Perm school are in serious condition and undergoing surgery, the regional Health Ministry has stated.

"Two criminals in masks attacked a teacher and students. As a result of an armed attack, nine people received knife wounds, one teacher and eight students," the press secretary said.

According to the local branch of the Russia's Investigative Committee, the incident occurred when two students armed with knives began fighting with each other and other students and teachers attempted to break up the fight.

“Early on January 15 in one of the schools of the Motovilikhinsky District of Perm a knife fight broke out. The faculty and students present at the scene attempted to break up the fight. As a result, (several) students and a teacher sustained knife wounds,” a press release issued by the authorities said.

The suspects were brought into custody and the authorities are currently trying to determine their motives.

​A source in regional emergencies services also told Sputnik that at least "nine children and one teacher were injured" during the altercation while local police said in a press release that "eleven minors and one teacher sustained slashing wounds."

Investigators told Sputnik that two students had a brawl due to personal enmity, while the teacher and other students were injured when they tried to stop the fight.