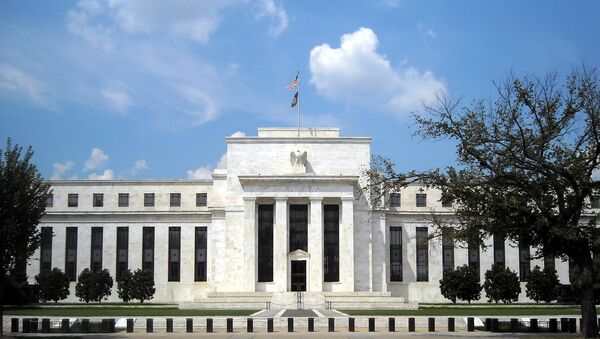 Kristian Rouz – Two high-ranking officials at the Federal Reserve expressed their scepticism of  monetary and broader economic policies, as core inflation is still below the central bank’s 2-percent target. Whilst there is little opposition to the current pace of Fed rate hikes, some board members are advocating for a wait-and-see approach.

They also suggest taking action after the macroeconomic fundamentals are in line with their targeted levels.

President of the Federal Reserve Bank of Boston Eric Rosengren warned the decline in the US jobless rate could produce a sudden acceleration in inflation. This, he argued, would prompt the central bank to tighten rates more aggressively, resulting in the US economy sliding into a recession.
Rosengren made his comments at the Global Interdependence Center Friday. Many economists have argued that as the 10-year business cycle is ending, the economy is facing a heightened risk of a cyclical recession.

Some conservative commentators are also suggesting if President Trump had not won the 2016 election, the US would already have been in a recession, as  current economic expansion is heavily reliant on higher business spending (stemming from  President Trump’s private sector enthusiasm), stock market gains, and the White House’s deregulatory efforts.

US unemployment is now at 4.1 percent, and many economists have said the current jobless rate was supposed to put a sustained upward pressure on inflation – which hasn’t happened, to Fed Chair Janet Yellen’s dismay.

“My concern is if we get too far away from where we want to be on a sustainable unemployment rate, and we use this current framework, then we will get to a situation where we have to raise rates fast enough that we will actually find it very difficult to get back to full employment without causing a recession,” Rosengren said.

Asian Dawn: Think Tank Claims China Will Supplant US as Largest Economy in 2032
His comment is based off a presumption that higher borrowing costs could impair hiring. This is fully justified due to  low labor productivity, meaning higher employment produces less benefit to the economy.

Rosengren said the 2-percent inflation target should be replaced with an inflation target range of 1.5-3 percent, reflecting the indicator’s dynamics of the past two decades. Higher acceptable inflation could offset the gains in wages in a low-productivity labor market, thus staving off the negative effects of full employment to  economic growth.

This comes after other central bankers suggested an introduction of a 4-percent inflation target, which could also spur economic growth.

“We are approaching a time when a comprehensive reconsideration of the monetary policy framework is likely warranted,” Rosengren said.

Another central banker, Neel Kashkari of the Federal Reserve Bank of Minneapolis, expressed his concern regarding the still underperforming inflation.

He said the Fed should not raise rates for a while in order to not hurt economic expansion.

“I, for one, need to see more data,” he said on his Twitter in response to the commentators expecting a more aggressive Fed policy tightening.

Many new-school economists say the Fed should ditch its inflation-targeting altogether, replacing it with unconventional tools, such as price-level targeting – which they argue are more relevant in today’s hybrid post-industrial/digital economic reality.