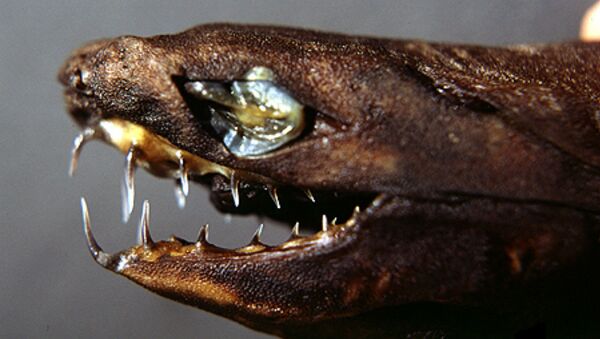 Social media users have been deeply shocked by the images they saw and compared the animal to the creatures from the "Alien" movies by Ridley Scott.

Scientists from the Taiwanese Fisheries Research Institute caught five rare sharks with horrifying jaws in the Pacific Ocean off the coast of Taiwan, Science Alert reported.

The species was discovered in the 1980s and described in 1990. Since then, scientists have only come across them a handful of times, which is why the sharks remain underexplored, the website noted.

Fisheries officials off the coast of Taiwan have hauled up a gaggle of rare viper dogfish! https://t.co/tOWTB9NZBM Image: Fisheries Research Institute pic.twitter.com/ZabrV161ub

The viper dogfish also called Trigonognathus kabeyai live in the northwestern part of the ocean. In the daytime they usually swim at a depth of 270 to 360 meters, and at night they come closer to the surface.

The sharks live off the coasts of Hawaii, Japan and Taiwan. They reach up to 54 centimeters in lenth and weigh about 0.75 kilograms.

Some media and Internet users said that the fish with terrifying jaws and needle-like teeth resembled the monstrous creatures from Ridley Scott's "Alien" movies.

What the hell nature!? pic.twitter.com/R4kKuQtt4S

Others reacted to the discovery with humor.

It makes a great soup.

I love this one 😛

Can I buy one for my aquaponics?

Despite their nightmarish looks, the sharks, however, are unlikely to pose a threat to humans as their diet mostly consists of crustaceans and bony fish.