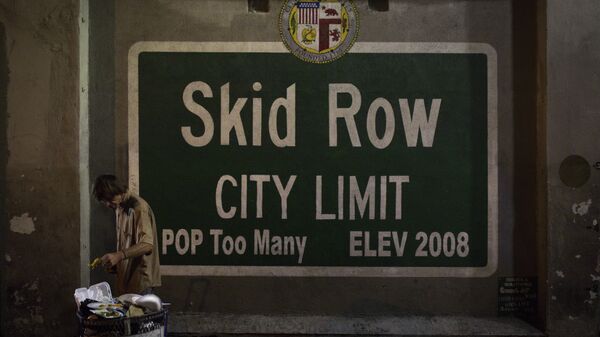 The Los Angeles Homeless Services Authority has counted a disheartening number of individuals on the streets – about 58,000 in 2017, marking a 23 percent increase compared with the year before. Sputnik interviewed Pete White, the Founder of the LA Community Action Network, and summed up the facts about the most notorious hot spot for the homeless.

An astonishing video, featuring thousands of homeless people on the streets of Los Angeles, appeared on the web over Christmas. The number of people in the 50-block district Skid Row has risen to an estimated 20,000, with the majority of them having erected tents to have a shelter for the night. Pete White, the Founder and Executive Director of an organization that works to ensure that the rights to housing, health and security are maintained in the city, has shared his views on the plight.

Discussing the reasons for being homeless with Sputnik, White expressed his hopes that in 2018, society has moved beyond the idea that homeless people live in the streets by choice, or because they are suffering from mental illness or substance abuse.

“The three major reasons for people being homeless in Los Angeles County are: housing availability, housing affordability and poverty,” he explained.

Certainly, the rising cost of housing and rent in the city has forced people to look for alternative “accommodation” options. According to data retrieved from the Joint Center for Housing Studies, more than 2 million households have housing costs exceeding half of their income. The gap between income and the cost of housing is so huge, that even having a full-time job will not be enough to prevent a person, or even an entire family, from becoming homeless. 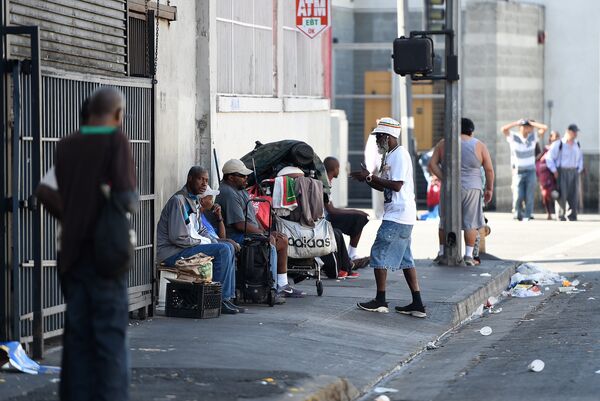 Skid Row is not just an illustration of desperate poverty; Shanks Rajendran’s documentary “Los Scandalous” has shown the lives of other people living and working in the district – drug dealers, pimps and prostitutes. The Australian filmmaker regarded them as a “community,” saying that Skid Row residents have accepted their position in society, and everybody in Los Angeles has accepted it. One thing to know is that poverty does not make an individual a criminal; studies have shown that homeless people are more often victims of crime, rather than perpetrators. 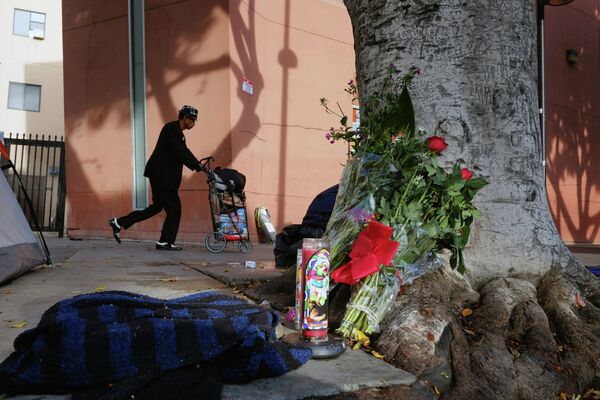 Speaking of crimes, White emphasized that authorities have always chosen the wrong path in responding to the Skid Row crisis, opting for criminalization of the homeless instead of building affordable housing units.

“The response continues to be “So, let’s attempt to sweep the houselessness under the rug,” White elaborated.

The dichotomy of LA’s downtown is shocking: on the one hand, you see the new downtown, brandishing fancy buildings, business centers, bars and restaurants, but on the other hand, you see Skid Row, bursting with people in need, drug addicts and rubbish bags that leave an extraordinary smell.

The Los Angeles Central Providers Collaborative has prepared a report under the title “No Place to Go,” having brought the public toilet crisis in Skid Row to light. The report reveals that people have no other choice but to share nine toilets, which do not guarantee any privacy, i.e., there are no doors, and anyone can walk in on a person using the restroom. To get into the toilets, one has to step over other homeless people sleeping in a crowded yard. This problem resides in the fact that at night, automated public toilets have their power shut off and are rendered inaccessible.

“On any given night there are 1,777 unsheltered homeless people forced to share 9 toilets,” says the report, which means that Skid Row is 80 public toilets short of the sanitation standard laid out by the United Nations.

Is There Any Possible Solution?

Being the CEO of the Los Angeles Community Action Network, Pete White shared their three-pronged approach to dealing with the homeless population.

“It’s community organizing, our power building, we believe it’s necessary to build power, to make sure political decisions that are made actually benefit us. The second portion is community improvement, as we think that it’s not enough to just organize the community, we should improve the communities as well. Then the third is community services. The ones that we are providing right now are legal services… focused on illegal evictions, wage issues and family reunification.”

The strategy for dealing with the homelessness problem lies in the “Housing First” concept, which will pave the way for tackling other issues, such as health care, substance abuse and mental illness.

“Promising supportive housing is the direction that the country needs to go in to resolve the homeless crisis. We have counted that there are about 58,000 homeless people in Los Angeles, and at the same time there are only about 13,000 shelter beds and 14,000 permanent supportive housing units. So, simply it’s not enough.”

White revealed that the shelter conditions in Los Angeles left much to be desired: besides the fact that people have to leave them at 6 a.m., they cannot live there with their loved ones, a major drawback which encourages them to stay in the streets. Yet despite all those barriers, “shelters in Los Angeles are full on a nightly basis.” 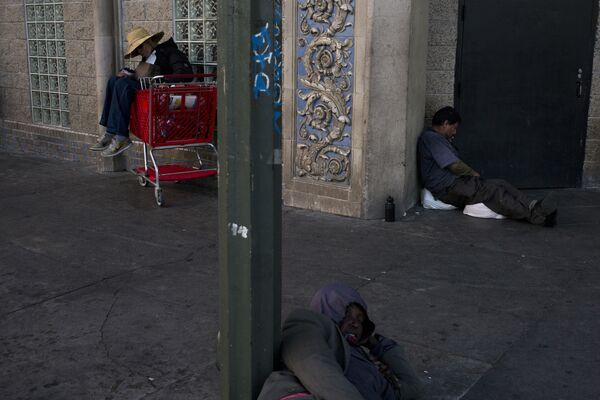 The pressing issue has spread so widely, that a Safe Parking Program has been introduced, aimed at helping families who have faced unanticipated life-changing events, which have left them with no choice but to live in their cars and sleep in parking lots.

Is There Any Chance That The Homeless Could Reintegrate Into Society?

When Sputnik asked White whether there was any possibility for the homeless to reintegrate into society after spending 15-16 hours a day in the streets for years, White explained the difficulties of the process.

“Harvard University has recently released its Housing Index that shows Los Angeles is in need of 550,000 housing units per low income housing. So, for us to begin to deal with homelessness, mental health and substance abuse, we have got to figure out how to stabilize the housing.”

White proceeded to raise the issue of jobs which cannot ensure that people, who are employed, will actually stay in the house. While the prices for housing continue to “balloon,” wages remain stagnant and “non-existent.”

“The level of abject poverty in Los Angeles is off the rails. Think about it this way: in Los Angeles fair market rent for a two-bedroom apartment is $2500 and if you do the math, it’s roughly around $31,000-32,000 a year in rent alone. In order for that unit to be affordable, a person will have to make upwards of almost $100,000.”

Sputnik got a chance to talk to an African-American woman, who asked to remain anonymous. She confessed that she has been homeless since September 2017, and despite the fact that she kept in touch with her family, they were not aware of her plight. When asked how she was handling the situation and how she ended up in the streets, she answered “I think that these are the ups and downs of life. I was working as an insurance agent and lost my job.”

“What I don't like is when people look down on you because you are homeless… They look at you and think that you don't have a brain between your ears and there are reasons why you are homeless.”

The website, Skid Row Stories, is reminiscent of a project called “Humans of New York,” and telling the stories of people who live on the sidelines.

A formerly homeless woman, who is said to prefer to remain anonymous, told her heartbreaking story to John Hwang, the founder of Skid Row Stories. The 26-year-old woman was abducted and raped when she was a little girl, and after all these years, she pulled herself together and forgave him.

“I was kidnapped and raped when I was 8 by a 53 year old man. I can’t make any friends. I have a lot of trust issues because of what happened to me. It’s hard for me to make friends, and to feel accepted, and to feel comfortable around people. I’ve had a lot of trauma in my life, but I’ve dealt with that, I finally forgave the person that raped me, but I still have PTSD. I’m 26. I’ve had fibromyalgia since I was 21, I’m in chronic severe pain 24/7, you don’t have a life, and stress makes it worse for my fibromyalgia."

"I feel like I’m living in a twilight zone episode and it’s not ending. I’m a heroin user, it’s how I medicate myself, it saved my life. I’m one of these people who needs it or else I’ll go crazy and kill myself. I tried killing myself many times. A year and a half ago, I went to a women’s shelter and imagine 50 women in one room, I was being verbally abused there, it was so bad, it traumatized me, so I live at a local park now. I pray a lot, that God will give a huge miracle. I dig in the trash all hours of the night, I beg because I’m so hungry. Lately I feel like hurting myself. I’ve been feeling very depressed. It’s really hard, it’s seriously f*cking hard. I want to be heard, when my dream comes true one day, and I’m not homeless anymore, I can help people by telling my story of becoming homeless, never give up hope.”

The story of Hayk Makhmuryan, nicknamed “The Art Guy,” was like a light in the dark. By the time John spoke to him, Hayk had already been in Skid Row for 7 years, running an arts program at a homeless shelter.

“Embracing and channeling creative energy is the best way to build bridges, make connections, bring people and ideas together. Creativity is a human right.”

He grew up in Armenia during the war in Nagorno-Karabakh, and his family had to live through hard times without electricity and running water for years. After moving to the United States, he graduated from the Art Center in Pasadena, and could have found a lucrative job with his education, but decided instead to do something good for the community of Skid Row. His studio works twice a week, with all the art tools and supplies needed, and its doors are open to everyone.

Sputnik has reached out to The Housing Authority of the City of Los Angeles but has yet to receive a response.

The views and opinions expressed in this article are those of Pete White and do not necessarily reflect Sputnik’s position on the matter.