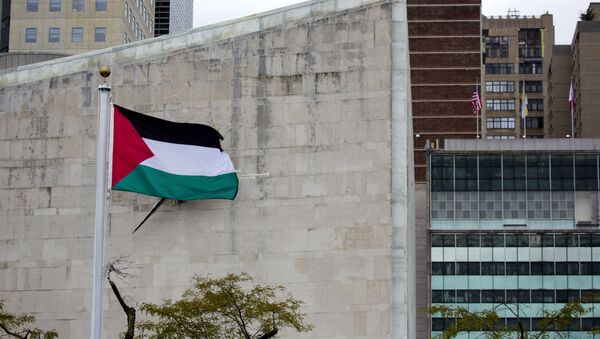 CAIRO (Sputnik) - The Executive Committee of the Palestine Liberation Organization (PLO EC) called on Saturday for convening an international conference under the auspices of the United Nations with the aim of creating an independent Palestinian state with its capital in East Jerusalem.

"The Executive Committee of the PLO urges the international community to seriously work in order to convene a full international conference under UN auspices. [PLO EC expects that the conference would guarantee] the creation of an independent Palestinian state with its capital in East Jerusalem [within the borders that existed before 1967 Arab–Israeli War]," the PLO EC said in a statement.

"We call for ensuring financing through the PLO, the sole legitimate representative of the Palestinian people, in order to maintain the steadfastness of the Palestinians in occupied Jerusalem, to render assistance to the families of the victims, to those wounded and prisoners," the PLO EC also stated. The PLO EC added that funding was necessary amid threats of the United States to cut its aid to UNRWA.

World
Moscow Reaffirms Illegality of Israeli Settlement Activities on Palestinian Soil
On December 6, Donald Trump officially recognized Jerusalem as the capital of Israel and instructed the State Department to begin preparations for the transfer of the US Embassy from Tel Aviv, which sparked ignited fierce protests among Palestinians, incited violent clashes between them and Israeli security forces and induced Hamas to launch a new intifada.

Palestinians claim east Jerusalem as the capital of their own state. Almost a thousand of people were estimated Friday to oppose Israeli police in the West bank and another thousand along the Gaza Strip’s border with Israel.

Recently, Trump claimed that Palestine was "no longer willing to talk peace" with Israel, and questioned the issue of giving "hundreds of millions" in aid payments to Palestine. Israeli Prime Minister Netanyahu has supported Trump's drive to stop funding the United Nations Relief and Works Agency for Palestine Refugees in the Near East (UNRWA), calling the agency "an organization that perpetuates the Palestinian problem."