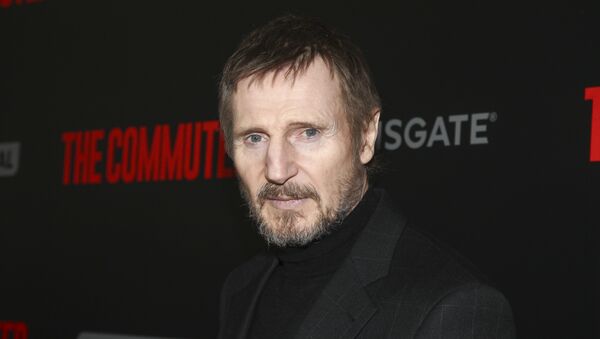 © AP Photo / Andy Kropa/Invision
Subscribe
Over the past few months, a spotlight has been shone on allegations of sexual harassment and misconduct in the entertainment industry following a series of accusations against high-profile Hollywood film producers and actors.

Appearing on an Irish TV show, popular actor Liam Neeson took the opportunity to speak out against the allegations of inappropriate behavior that have inundated Hollywood, affecting his colleagues.

“There is a bit of a witch hunt happening,” Neeson said. “There’s some people, famous people, being suddenly accused of touching some girl’s knee or something and suddenly they’re being dropped from their program or something.”

At the same time, Neeson outlined that the #MeToo movement was “healthy” and such allegations were widely spread “across every industry,” but “the focus was on Hollywood.”

Neeson brought up the case of former radio host Garrison Keillor, who was fired by Minnesota Public Radio over alleged misconduct.

“He was listening to a sad story from a female friend of his. At the end of this, he put his hand to her back [to console her], and she had a blouse on, and it was her bare back. And he immediately took his hand away and apologized. She said ‘don’t worry about it, forget about it’. Months later, he gets a call from a lawyer, or his radio station does, saying he inappropriately touched this lady. And he was dropped like that.”

Following the story about Keillor, The Late Late Show’s host Ryan Tubridy cited the names of Kevin Spacey and Dustin Hoffman as examples of other prominent men who have been accused of misconduct, but Neeson stood by his fellow actors.

“The Dustin Hoffman thing, I’m on the fence about that. When you’re doing a play, and you’re with your family — other actors, technicians — you do silly things. And it becomes superstitious, if you don’t do it every night you think it’s going to jinx the show,” he said.

Furthermore, he branded accusations against Hoffman, who has been accused of harassment and assault by multiple women, as “childhood stuff,” but at the same time clarified “I’m not saying I’ve done similar things to what he’s done.”

Certainly, Liam’s appearance and stance on #MeToo couldn’t go unnoticed on social media, with users slamming him for defending “abusers”:

Disappointed by Liam Neeson’s comments. Reinforcing the idea that inappropriately touching women was the norm and therefore ok. The reference to a ‘witch hunt’ also irked me. #LateLateShow

I can’t believe this Liam Neeson was a national treasure and now….he’s over

Dear Liam Neeson: the #MeToo movement has not become a bit of a "witch hunt." That statement along with the anecdote you describe misses the point entirely. Here's a good rule for men in Hollywood: hop on the train or get off the tracks and STFU.#TimesUp https://t.co/rzc0JmPsN1

While others showed a bit of support, saying that he might actually be right:

Everybody is so quick to condemn Liam Neeson. It's a radical way of thinking, but what if he's right. Think of the Salem Witch Trials and the Red Scare. People were falsely accused for others' personal gain. We can't instantly shun someone when they've only been accused.

On the contrary, I respect him more than ever now

Me too!! It takes courage to speak the truth when the media is handing down verdicts without hearings or trials. 👍🏻👍🏻 Both sides need to be heard — not just one….

His words are true. There is legitimate abuse and harassment like Kevin Spacey and Weinstein, but some claims that are ruining the lives of many is petty and childish shit. And the internet has a witch hunt every time without evidence. Its ridiculous

The wave of sexual allegations against powerful men in Hollywood  kicked off the #MeToo movement, which originally appeared on Twitter as a hashtag, encouraging women to publicize their experiences of being sexually abused, assaulted or harassed.