Who, What and Why Triggered the Iranian Protests 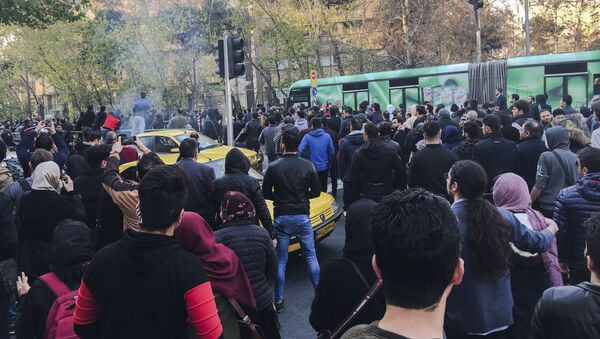 © AP Photo
Subscribe
International
India
Africa
The Iranian protests revealed the split both within the Iranian elites, and with society. President Hassan Rouhani still faces resistance from the country's ultra-conservatives. It is likely that the unrest was prompted by domestic economic difficulties, rather than by the actions of external players.

The protests which erupted on December 28, 2017, in Iran's major cities, including Tehran, Mashhad, Isfahan and Rash immediately became the focus of special attention from mass media, prompting theories of foreign interference or even a new revolution in the country. Sputnik Persian has taken a closer look at the problem.

The timing of the event raises questions: What exactly happened between the end of December 2017 and the beginning of January 2018 that triggered the public discontent? And why did rallies kick off in Mashhad?

In December, Tehran undertook a number of economic measures which may have been the last straw. These measures led to the hike in fuel prices, which resulted in the price increase for almost all types of goods. Meanwhile, an epidemic of avian influenza killed 15 million chickens, further inflating the price for eggs and chicken — the most popular and affordable foods for Iranians.

That same month, Iranian President Hassan Rouhani proposed a new budget at the Iranian Majlis, the country's parliament, which envisaged the abolishment of some subsidies for the population. The new budget also suggested an increase in taxes, including on leaving the country, which will see a nearly threefold increase, from $21 to $61. Simultaneously, Tehran will boost military expenditure, including the maintenance of its armed forces abroad. 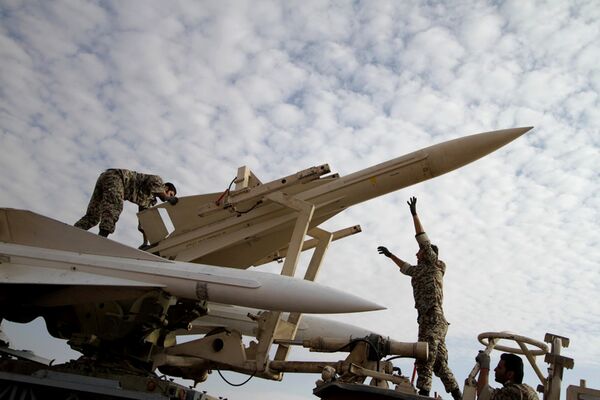 Hassan Rouhani Could be the Main Target

Although the Rouhani government has done much to pull the country back from economic crisis, including signing the Joint Comprehensive Plan of Action (JCPOA) with the P5+1 countries and the EU in 2015, the president is not "omnipotent." Rouhani is second to the country's supreme leader Ayatollah Ali Khamenei in terms of power, therefore part of the president's economic plans and measures have yet to be implemented.

Mossad Chief: Israel Has 'Eyes and Ears' on the Ground in Iran
Despite the 4-5 percent GDP growth under Rouhani, the unemployment rate in the country remains at 12.4 percent, and youth unemployment at 28.8 percent. It was the youth who became the driving force for the recent protests.

In addition, Iran's military political activities abroad — in Iraq, Syria and Yemen — required considerable expenditures on the part of Tehran. In 2013, the Iranian government allocated $15 billion for Syria, which allowed Bashar al-Assad to fulfill his social obligations and finance his army. From 2015 onward, Iran's economic assistance to Damascus has amounted to $8-9 billion per annum.

As a result, Rouhani was forced to take unpopular measures, causing dissatisfaction among different social layers in the country. 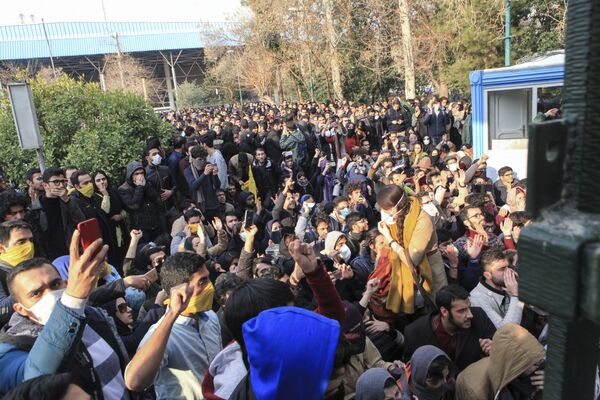 In this photo taken by an individual not employed by the Associated Press and obtained by the AP outside Iran, university students attend a protest inside Tehran University while anti-riot Iranian police prevent them to join other protestors, in Tehran, Iran, Saturday, Dec. 30, 2017
© AP Photo

Why Did Protests Kick Off in Mashhad

It is no coincidence that protests began in Mashhad: Being a sacred city for Shiites, it is also the mainstay of ultraconservatives and their leaders Ebrahim Raisi — Rouhani's main rival in the 2017 elections — and Shiite Islamic cleric Ahmad Alamolhoda, who opposes President Rouhani and his policies.

Iran Reproves US Sanctions Which 'Cross All Red Lines,' Vows to Respond
According to some reports, it was Alamolhoda who called upon the residents of Mashhad to take to the streets against Rouhani. Yet another leader of the conservative opposition, former Iranian President Mahmoud Ahmadinejad, joined his associates. Unconfirmed reports say that Ahmadinejad was arrested in the western Iranian city of Bushehr for contributing to the unrest. Iranian authorities and the media have not commented on the issue yet.

However, it appears that the situation did not develop according to the plans of the initiators. Economic slogans and demands were quickly changed to political ones, criticizing the Islamic regime in the country, as well as its domestic and foreign policies. The wave of protests engulfed the whole of Iran.

What Were the Major Social Drivers of the Protests?

Young people make up more than 60 percent of the country's population. They are well-educated and use the Internet. It seems that many of them feel uncomfortable with the Islamic ideological pressure that regulates almost all aspects of everyday life. Out of 80 million people, 48 million Iranians have smartphones and 40 million use Telegram messenger. They are well aware of what is happening in the world.

However, besides pro-Western youths, the nation-wide protests also involved conservative Muslims and representatives of the poorest strata. The representatives of various political trends signaled their discontent with the Iranian leadership. Still, the protesters often expressed contradictory views. 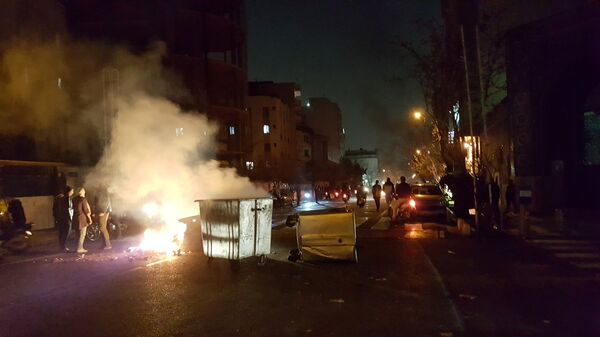 At the same time, the Iranian middle class — Rouhani's voters — did not support the protests and opposed the nation-wide rallies. While the demonstrations involved various social and political groups, including those from the highest echelons of power, they could be divided into two camps: liberal reformers and radical conservatives.

Perhaps everyone was interested in using the situation in their political interests over the course of the protests. The reformer Rouhani can tell his opponents that they are hampering reforms, so people taking to the streets are in favor of change. Conservative radicals may answer that, although Rouhani has been in power since 2013, he has done nothing to improve people's lives.

Ken Roth also shares a pic from a pro-Khamenei rally and suggest it's an anti-Khamenei rally even though it's pretty obvious.. pic.twitter.com/RuhCF9AdhG

What Did the Iran Protests Indicate?

1. The protests appeared to be largely triggered by internal economic and political causes.

2. It's unlikely that they were provoked by external forces. Foreign influence was limited to anti-Iranian propaganda in the mainstream media and Internet and statements from some foreign leaders directed against Tehran.

3. The protests translated into neither a revolution, nor a general uprising: Although demonstrations engulfed the country's major cities, the number of protesters (from 40,000 to 400,000, depending on the estimates) was insignificant, given the fact that the country's population amounts to 80 million.

4. The Iranian protesters did not have a unified goal, program or leaders.

5. Iranian authorities did not exercise tough or excessive measures while handling the situation.

6. Tehran plans to carry out a thorough investigation of the events and consider the demands of the protesters. It was reported that the municipality of Tehran has already approved the idea of creating a specialized park for public protests, modeled on London's Hyde Park.

7. The events indicated a split within the Iranian elites, as well as the country's society. However, it depends on the leadership of the Islamic Republic of Iran (IRI), its domestic and foreign policies whether protests will be resumed.

Since late December 2017, about 3,700 people have been detained during the protests, while at least 20 people were killed. According to Interior Minister Abdolreza Rahmani Fazli, about 42,000 Iranians took part in the rallies.

The views expressed in this article do not necessarily reflect the official position of Sputnik.