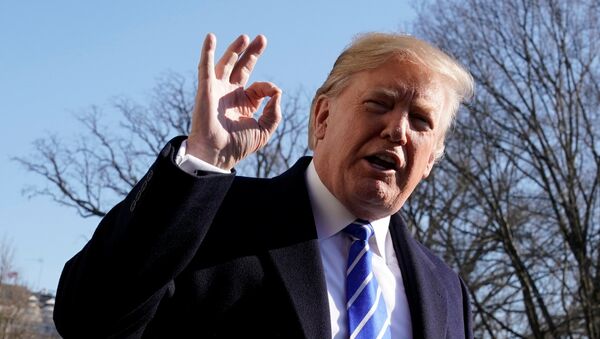 US President Donald Trump stated Friday that there are only two ways forward for the Iran deal: "fix the deal's disastrous flaws, or the United States will withdraw." He said both parties in the US Congress must work together to produce a bill demanding "that Iran allow immediate inspections at all sites requested by international inspectors."

Notably, Trump has not withdrawn from the multilateral nuclear deal, despite repeated promises to do exactly that.

However, his path forward would include provisions not a part of the original deal, in keeping with the president's insistence that the agreement gave Iran "far too much in exchange for far too little." In any new legislation on Iran, Trump demanded that Iran's missile development be subject to sanction as well and that there be no sunset clause on any weapons restrictions. The bill from Congress needs to ensure "Iran never even comes close to possessing a nuclear weapon," Trump stated, adding that "unlike the nuclear deal, these provisions must have no expiration date. My policy is to deny Iran all paths to a nuclear weapon — not just for ten years, but forever."

Trump did not pursue tougher sanctions in connection with the nuclear deal on Friday, as some observers had expected. "I am waiving the application of certain nuclear sanctions," Trump said, "but only in order to secure our European allies' agreement to fix the terrible flaws of the Iran nuclear deal. This is a last chance."

The US did, however, place 14 "individuals and entities" on "the sanctions list" for being involved with Iran's ballistic missile program, linked with human rights abuses "and other illicit activities" shortly before the announcement of the waiver.

"In the absence of such agreement, the Unites States will not again waive sanctions in order to stay in the Iran nuclear deal. And if at any time I judge that such an agreement is not within reach, I will withdraw from the deal immediately," the president threatened.

"I hereby call on key European countries to join with the United States in fixing significant flaws in the deal, countering Iranian aggression, and supporting the Iranian people," Trump's statement continued. "If other nations fail to act during this time, I will terminate our deal with Iran." European partners in the deal are France, Germany, Russia and the UK. China is also a partner in the historic deal.

"Trump's statement on the Iran deal today is unhinged, irrational and utterly disconnected from reality," according to John Glaser, director of foreign policy studies at the Cato Institute.

Trump's statement on the Iran deal today is unhinged, irrational, and utterly disconnected from reality. pic.twitter.com/dn3gqUTTyv

​Earlier on Friday, Kremlin spokesman Dimitry Peskov stated regarding the deal that, "You know the position of the Russian side: we adhere to and are committed to the idea of the need to preserve this agreement on the Iranian nuclear dossier… We believe that it is extremely important to preserve this consensus," and the "viability of this document."

The US administration must stop desperate attempts to undermine the Joint Comprehensive Plan of Action (JCPOA) on Iranian nuclear program and fully comply with this solid deal instead, Iranian Foreign Minister Javad Zarif said Friday.

"Trump's policy & today’s announcement amount to desperate attempts to undermine a solid multilateral agreement, maliciously violating its paragraphs 26, 28 & 29. JCPOA is not renegotiable: rather than repeating tired rhetoric, US must bring itself into full compliance — just like Iran," Zarif wrote in his Twitter blog.