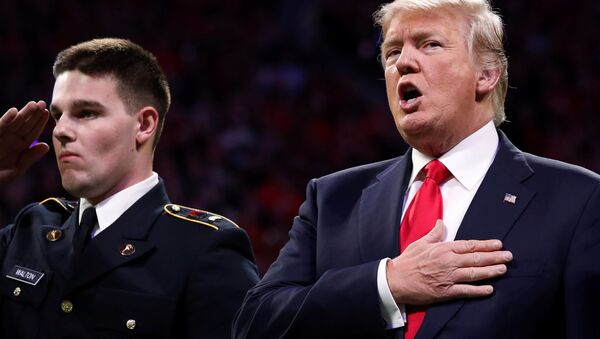 © REUTERS / Jonathan Ernst
Subscribe
Meeting massive outrage from both US citizens and officials around the world after his insulting remark, US President Donald Trump has decided to clarify what he actually said.

US President Donald Trump said that the Democrats "made up" the story, claiming that he referred to Haiti as a "sh*hole country," emphasizing that he had never said "anything derrogatory about Haitians."

"The language used by me at the DACA meeting was tough, but this was not the language used. What was really tough was the outlandish proposal made — a big setback for DACA!" Trump tweeted, responding to the mass public outrage by his derisive remark about Haiti, El Salvador and several African countries and his call to bring more migrants from countries like Norway instead has been seen by critics as a "stain" on America’s reputation.

He further said that the DACA had now taken a big step backward, not properly funded.

The so-called bipartisan DACA deal presented yesterday to myself and a group of Republican Senators and Congressmen was a big step backwards. Wall was not properly funded, Chain & Lottery were made worse and USA would be forced to take large numbers of people from high crime…..

….countries which are doing badly. I want a merit based system of immigration and people who will help take our country to the next level. I want safety and security for our people. I want to stop the massive inflow of drugs. I want to fund our military, not do a Dem defund….

Sadly, Democrats want to stop paying our troops and government workers in order to give a sweetheart deal, not a fair deal, for DACA. Take care of our Military, and our Country, FIRST!

When meeting with lawmakers on Thursday to discuss a potential immigration deal, Donald Trump angrily lashed out at the suggestion that he restore protections for immigrants from Haiti, El Salvador and several African countries who used to enjoy the temporary protected status, which he revoked last year.

"Why are we having all these people from shithole countries come here?" he reportedly said, adding that the US would be better off bringing in more immigrants from countries like Norway.

Rattled by the US president's offensive comments, many current and former residents of nations maligned by Trump have responded angrily and demanded an apology.

Trump’s divisive language has been equally criticized inside the US itself with Republican Congresswoman Dina Titus describing Trump as a "vile stain" on America’s reputation.

Just when you think he cannot say anything more vulgar and offensive, he embarrasses us again. He is a vile stain on our country's reputation. https://t.co/g5YMDlTvQB via @nbcnews

Cedric Richmond, a Democratic representative and chairman of the Congressional Black Caucus, slammed the president’s comments as “yet another confirmation of his racially insensitive and ignorant views.

Mia Love, a Republican Representative of Haitian descent dismissed Trump’s comments as “unkind, divisive, elitist” and demanded an apology to the American people and the nations he “wantonly maligned.”

Here is my statement on the President’s comments today: pic.twitter.com/EdtsFjc2zL

In an angry tweet, the former Haitian President Laurent Lamothe minced no words saying that Trump’s remark “shows a lack of respect and ignorance.”

SHAME ON TRUMP! The world is witnessing a new low today with this #ShitholeNations remark! totally unacceptable! uncalled for moreover it shows a lack a respect and IGNORANCE never seen before in the recent history of the US by any President! Enough is enough!!

An equally incensed former Mexican President Vicente Fox, who has never been a fan of the current occupant of the White House, wrote that “America’s greatness was built on diversity.”

.@realDonaldTrump, your mouth is the foulest shithole in the world. With what authority do you proclaim who’s welcome in America and who’s not. America’s greatness is built on diversity, or have you forgotten your immigrant background, Donald?

The internationally-acclaimed author Stephen King joined the irate chorus of condemnation by suggesting that the US might not really be an ideal  destination for a Norwegian looking to emigrate.

Why would people from Norway want to immigrate here? They have actual health care, and longer life expectancy.

Haiti ambassador to the US Paul G. Altidor, earlier called Trump's comments “regrettable” and based on “clichés and stereotypes rather than actual fact.”

The envoy underscored the indelicate timing of the comment as Friday marks the eighth anniversary of the 2010 earthquake in Haiti, which left more than 200,000 people dead.

This is already the second time in a month that Trump has been accused of making racially charged remarks during private meetings.

In December, The New York Times reported that Trump said that immigrants from Nigeria would never "go back to their huts" in Africa after experiencing life in the United States. The White House denied Trump made those comments.

@realDonaldTrump no one from Norway wants to come to this shithole country. They have healthcare for all, family leave, free education and real gun control. https://t.co/yL0gmS55Yw

Of course people from #Norway would love to move to a country where people are far more likely to be shot, live in poverty, get no healthcare because they’re poor, get no paid parental leave or subsidized daycare and see fewer women in political power. #Shithole

A deal clinched by a bipartisan group of Senators to provide protection to juvenile immigrants known as Dreamers is facing pushback from the President, The Hill reported.

Senators  Jeff Flake (R-Ariz.) and Dick Durbin (D-Ill) said Thursday that a group of six senators has locked down an agreement amongst themselves on a fix for the Deferred Action for Childhood Arrivals (DACA) program with a border security package.