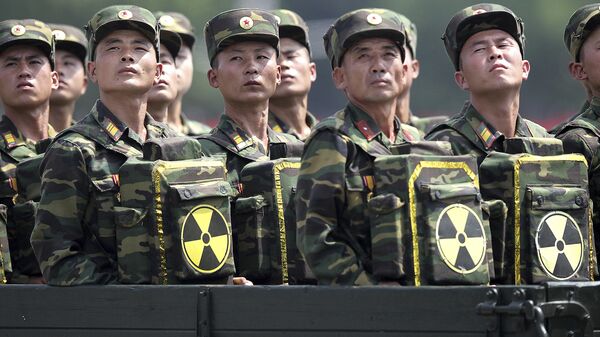 North Korea has stepped up tunneling activities at its sole nuclear test site, according to US-based think tanks. Satellite imagery has revealed that activity around the Punggye-ri test site has greatly increased, with mining carts and piles of excavated material littering the landscape.

The analysis comes courtesy of the prominent 38 North think tank, which focuses on North Korea — particularly scrutinizing satellite photographs taken of the isolated Asian nation. The 38 North analysts acquired new images of the test sites, and they claim that the North Portal, the site of the last five North Korean nuclear tests, is completely flooded.

As a result, North Korean workers have been spotted excavating around the West Portal, with nine mine carts and large piles of excavated material appearing outside of the tunnel. It has also slightly expanded in size.

The North Portal seems to have been abandoned due to the damage it sustained in September, during the country's last nuclear test and its largest to date. The underground nuclear test is believed to have seismically destabilized the region and caused a series of earthquakes.

The tremors included two earthquakes immediately after the test: the first is believed to have been caused by the test itself, the second by the collapse of one of the tunnels. Aftershocks were detected as late as November. The tremors may have even affected nearby Paektu Mountain, a sacred mountain throughout Korean history and a major symbol of the North Korean regime.

Japan's TV Asahi reported that 100 workers were killed in the North Portal's collapse following the test. Cave-ins and nuclear contamination are also feared at the site. Now the West Portal, a mostly-unused tunnel complex a few thousand feet away from the North Portal, appears to be under construction to take the north's place, though Chinese and South Korean scientific authorities have warned that the entire site could collapse and spread radioactive waste if tests continue.

Elsewhere on 38 North, contributor Alexander Vorontsov, who heads the Institute of Oriental Studies of the Russian Academy of Sciences, said that North Korean diplomats were serious about the possibility of war with the US.

After visiting Pyongyang, Vorontsov said that tensions were skyhigh and soldiers were on high alert. "These [North Korea] officials feared that the US was already trying to shape the battlefield for a military operation against the North and that South Koreans do not seem to have grasped the reality that the Trump administration is set on a course for preventive war," he wrote.

"However, Pyongyang is extremely serious about this scenario and is not bluffing when it says that "only one question remains: when will war break out?"

While military tensions have shown no signs of breaking, with the US ordering three nuclear-capable B-2 stealth bombers to the Pacific territory of Guam on Thursday, both sides have proven more amenable to the notion of peace talks in 2018. North and South Korea are in the midst of peace talks that do not involve the US.

"With all of the failed "experts" weighing in, does anybody really believe that talks and dialogue would be going on between North and South Korea right now if I wasn't firm, strong and willing to commit our total "might" against the North. Fools, but talks are a good thing!" said US President Donald Trump via Twitter, taking credit for the talks beginning.

In October, Trump infamously declared that his Secretary of State Rex Tillerson was "wasting his time trying to negotiate" with North Korean leaders.