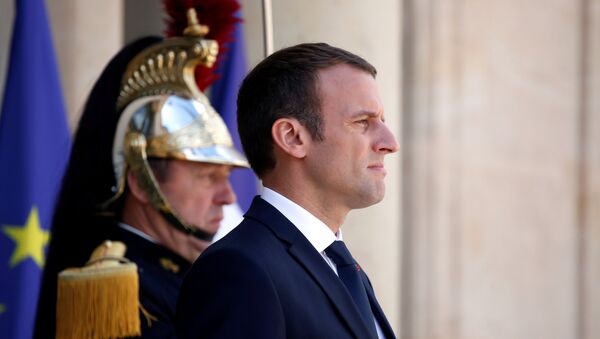 Finian Cunningham
All materials
This year French President Emmanuel Macron has declared he will crack down on “fake news” with new laws banning publication of “offending” information.

The question is: who decides what “fake news” is? It is the French government. That means any article or viewpoint published across various media platforms is liable to be deleted – if French authorities judge the content to be “fake”.

It’s not hard to imagine how these new laws will be used to target Russian news media in particular. Macron has already made tendentious claims that Russian media outlets, Sputnik and RT, interfered in the French presidential elections last year by allegedly spreading “fake news” about his campaign.

Sputnik and RT both rejected the allegations made by Macron. When Sputnik ran a couple of articles during the French elections they were based on critical comments issued by Macron’s opponents. Nothing more sinister than that.

During an official visit to Paris three weeks after Macron’s election last May, Russian President Vladimir Putin told a press conference that the French leader did not delve into allegations of Russian media interference during their private conversations.

If Macron had a case, why didn’t he raise it during his high-level meeting with Putin? The fact that he didn’t suggests that the French president is grandstanding with baseless claims of “Russian meddling” – in the same way that American and British politicians have been doing over the past year.

Let’s get back to the issue of forthcoming French media laws and the danger they pose to free speech. So, if the French authorities deem any published content to be “fake”, they are arrogating the power to ban it.

The bitter irony of this development comes on the third anniversary this week of the Charlie Hebdo massacre in Paris.

One in Four French Citizens Find Macron's Versailles Speech Convincing - Poll
Recall that three years ago on January 7, 2015, a pair of Al Qaeda-linked gunmen stormed the offices of the satirical magazine and shot dead 11 people. The atrocity prompted millions of people on to the streets of Paris declaring, “Je Suis Charlie”. It was supposed to be a rally in defiant support of the right to free speech and freedom of expression.

Three years on, Macron’s government is proposing to shut down freedom of expression with its new laws purportedly targeting “fake news” – or any viewpoint designated by French authorities as “not established in facts”. As already noted, Macron has made the provocative assertions that Russian media outlets are purveyors of “fake news” – a claim that he makes without credible evidence or facts.

The danger of this development to free speech is illustrated by a survey published this week which alleges that the French public are susceptible to believing in “conspiracy theories”.

State-owned channel France 24 reported that nearly 80 per cent of French people believe in one or more “conspiracy theories”, according to the cited recent survey.

From the France 24 report: “The poll by the Ifop group on behalf of the Fondation Jean Jaures think-tank and the Conspiracy Watch organization found that large sections of French society believed in theories with no grounding in established fact.”

Fair enough, some of the expressed beliefs among the 1,200 people sampled do seem a bit whacky. For example, some 10 per cent of respondents reportedly said they believe that the “Earth is flat”; and another 16 per cent apparently think that the American moon landings were faked.

However, the report carried by France 24, as well as by Agence France-Presse (AFP), goes on to conflate those dubious concepts with other “conspiracy theories” which are in fact, very arguably, valid alternative points of view.

It was reported that “54 per cent of respondents” believe that the American CIA were involved in the assassination of President John F Kennedy in 1963; and that “31 per cent agreed” with the viewpoint that Western state secret services have manipulated jihadist terror groups like Islamic State.

Here is how France 24 describes the JFK question: “One of the best-known conspiracy theories – that the CIA was involved in the assassination of John F Kennedy in 1963 – was believed by 54 per cent of respondents.”

On the jihadist terror topic, it reports: “Other theories tested in the survey… included that jihadist groups Al Qaeda and the Islamic State were manipulated by Western secret services (31 per cent agreed).”

Note how the established, government-aligned French media are making pejorative judgments about the assassination of JFK and the nature of jihadist terror groups. Any viewpoint that does not conform to the “official” one on either of these topics is denigrated as “a conspiracy theory not based on established fact” – or, in short, “fake news”.

Under President Macron’s new media laws, articles or opinions which contend an alternative version of either the JFK assassination or jihadist terror groups are liable to be banned from public platforms. Moreover, those media outlets that do carry such alternative views could be sanctioned for publishing “fake news”.

We do not have the space here to go into depth on the two subjects cited above. But suffice to say that there is abundant, credible research and literature to support alternative explanations to the “official narratives”.

JFK: The Assassination That Shook the World and Continues to Evoke Fierce Debate
On the assassination of President Kennedy in Dallas in November 1963, the official story that he was murdered by a lone gunman Lee Harvey Oswald has been debunked by several reliable sources. The elaborate nature of the shooting in Dealey Plaza and the subsequent cover-up had to involve a high-level covert state operation, including the CIA. The fatal headshot from the front is paramount proof that Oswald was not the assassin. Former American President Richard Nixon, as well as the late French President Charles De Gaulle, are both on record dismissing the official explanation about JFK’s murder as absurd (see JFK: An American Coup, by John Wilson-Hughes).

As for Al Qaeda and their offshoot jihadist terror groups, it has been scrupulously documented by Peter Dale Scott (The Road to 9/11), Michel Chossudovsky (America's 'War on Terrorism'), among other respected authors, that these groups were first created by American and British military intelligence as proxies to fight against Soviet troops in Afghanistan during the 1980s.

More recently, during the war in Syria, there is hard evidence showing that US, British and French intelligence agencies, along with Turkish counterparts and Saudi funding, instrumented Al Qaeda-linked terror proxies to wage a covert war for regime change. This contradicts the official Western government and media claims that Western states are “fighting against terrorism”. The evidence in fact shows Western government agencies colluding with terror groups to advance their geopolitical objectives, such as regime change.

Therefore, it is the official versions on JFK and terror groups that are arguably “fake news”. They are the “conspiracy theories not based on established fact”.

Yet, under Macron’s new laws, French authorities will be able to suppress valid, critical thinking and freedom of expression simply on the basis of assigning the label “fake news”.

This is a grave assault on democratic rights and the power of citizens to hold their governments to account, especially when those governments are up to their necks in criminality.

000000
Popular comments
How else can governments use their power to suppress the truth? People must be brainwashed to keep them believing in the duplicitous activities of government.
Yaffle
12 January 2018, 11:28 GMT3
000000
How many people are willing to bet that there are East German DDR STASI secret police agents out there, confused about why they have such a bad reputation, considering the world today lol