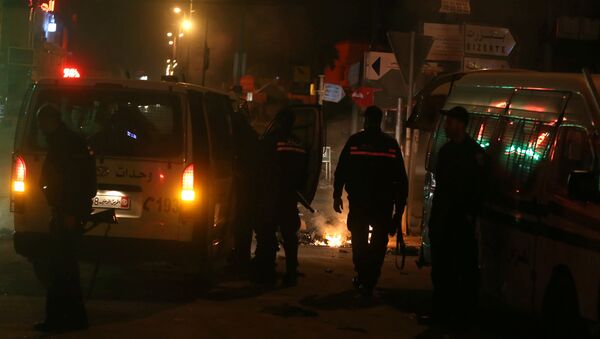 With large-scale street protests in Tunisia showing no signs of abating, the government is threatening to crack down on activists to restore order in the long-troubled North African state.

Dozens of police officers have been injured and more than 200 people arrested as wide-scale protests in Tunisia over rising prices and austerity measures entered their fourth day on Thursday, media reports said.

Starting out as peaceful demonstrations last week, the protests turned violent on Monday and Tuesday and have since spilled over to at least four other towns, including the outskirts of the nation’s capital Tunis, Reuters reported.

Africa
Protests in Tunisia: Popular Movement or Foreign Meddling?
A major rally is expected on Friday as the protesters remain all set to continue their actions until the austerity measures are rolled back.

Tunisia has seen days of street protests against hikes in value-added tax and social security contributions introduced earlier this month as the government grapples with a growing budget deficit and the need to meet its foreign debt obligations.

The authorities have deployed military units to protect government buildings, banks and stores and threatened to clamp down on violent protests some of which have resulted in looting, setting buildings on fire and violent clashes with the police.

"What happened is violence that we cannot accept. The state will remain steadfast," Prime Minister Youssef Chahed warned in a radio address.

Protests in #Iran & #Tunisia caused by economic downturn – so why is Western spotlight on Tehran? https://t.co/fIidlIR7FZ

​One protester was killed on Monday, but police said they were not responsible. There is no available information about the number of injured protesters.

In the past few years, the North African country has been rocked by massive demonstrations held each January to mark the anniversary of the 2011 Jasmine Revolution that toppled President Zine El Abidine Ben Ali.

It is insane how quickly the media & political class narrative of the crisis in #Tunisia has shifted to security, terrorism, and parties blaming each other. The fundamental problem is a #neoliberal economic model that is designed to impoverish Tunisia. #فاش_نستناو #LF2018

​Despite its relatively smooth democratic transition, Tunisia remains plagued by economic problems, high unemployment and political turbulence that no post-revolution government has been able to resolve.

The 2011 Jasmine Revolution led to a thorough democratization of the country and to free and democratic elections and sparked a wave of similar revolutions across North Africa and the Middle East which have come to be known as the Arab Spring.