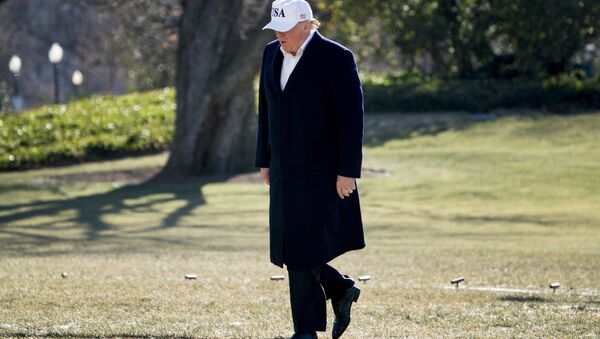 On Thursday, US President Donald Trump inquired of lawmakers in the White House, "Why are we having all these people from sh*thole countries come here?" while talking about immigrants from Haiti and Africa.

Trump's comments occurred while speaking with legislators about immigration protections, the Hill reported. Instead, according to people in the meeting, the president said the US should accept more immigrants from places like Norway.

Senators Lindsey Graham (R-SC), Dick Durbin (D-IL) and Tom Cotton (R-AR), and Representative Bob Goodlatte (R-VA) were some of the people attending the meeting and reportedly were taken aback by Trump's remark.

​Trump has relied on lawmakers to present a new immigration framework that will deal with expiring protections for immigrants who arrived under the Deferred Action for Childhood Arrivals (DACA) policy, sometimes known as the "dreamers." During a joint news conference with Norwegian Prime Minister Erna Solberg Wednesday, Trump stated that he would not sign a bipartisan bill that lacked funding for a wall on America's southern border with Mexico, but House Republicans have been split on whether to side with Trump. House Speaker Paul Ryan said last month that DACA is "a separate issue" from the wall. Ryan sees the wall issue as belonging to the conversation about government spending rather than immigration policy per se.

In a statement, the White House did not explicitly deny that Trump called Haiti and African countries "sh*tholes."

"Like other nations that have merit-based migrations, President Trump is fighting for permanent solutions that make our country stronger by welcoming those who can contribute to our society, grow our economy and assimilate into our great nation," a White House statement reads.

White House response to this story here. Went over every comment in the story before it was published: https://t.co/1RPtfAviYZ pic.twitter.com/dViIeW7Q1X

Trump previously berated immigrants from Haiti, alleging that they all "have AIDS," and claimed Nigerians couldn't be relied on to "go back to their huts" after seeing America, according to a New York Times report from December 2017. The White House at the time denied reports that Trump made the derogatory statements.