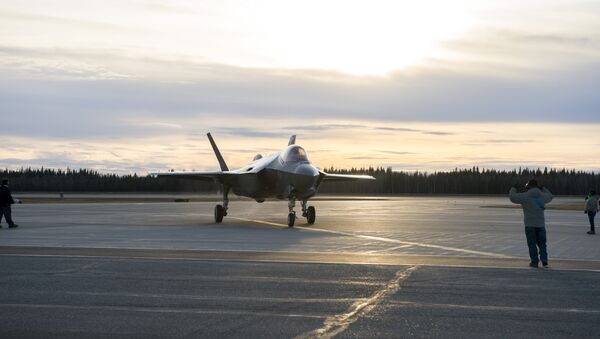 US President Donald Trump boasted on Wednesday that the US sold Norway high-tech F-52 jets, which would have been good news for jet manufacturers if it weren’t for the fact that the F-52 is a fictional aircraft that only exists in the video game “Call of Duty.”

"In November, we started delivering the first F-52s and F-35 fighter jets," Trump bragged during prepared remarks at a joint press conference with Norwegian Prime Minister Erna Solberg while emphasizing the order was worth "$10 billion."
Norway plans to procure 52 fifth-generation F-35 joint strike fighters, and Oslo has already authorized funding to acquire 40 F-35s. But if the F-52 exists outside of "Call of Duty: Advanced Warfare," it is so secret even the military doesn't know about it.

Netizens on Twitter proceeded to roast Trump following the error.

The president likely misread his notecards and actually meant to say that in November the US started delivery the first of 52 F-35 fighter jets, the Washington Post observed. Trump quickly attempted to correct himself, stating, "We have a total of 52 and they've delivered a number of them already a little ahead of schedule."

The F-35 program will end up becoming "DoD's most costly acquisition program," the Government Accountability Office noted in March 2016. Excluding acquisition costs of about $400 billion, US military planners have estimated that operating costs will bring the total lifecycle cost of the F-35 program up to $1.5 trillion.