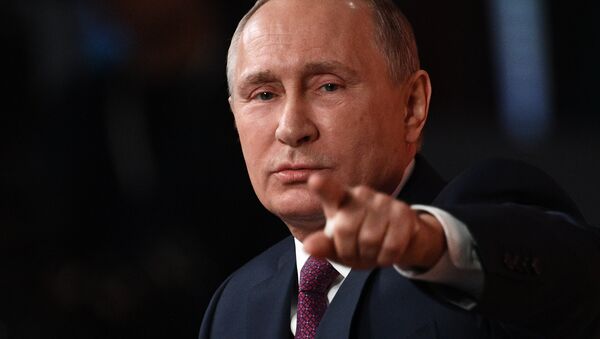 © Sputnik / Ramil Sitdikov
/
Go to the photo bank
Subscribe
During the meeting with executive editors of Russian print media and news agencies, President Vladimir Putin covered a wide range of issues, including the recent attack on Russian airbase in Hmeymim, relations with the United States, talks on the START treaty, North Korean issue and the fate of cryptocurrencies in Russia.

While speaking about the recent drone attack on the Russian Hmeymim base in Syria, Vladimir Putin said that he believed Turkey had nothing to do with the issue amid reports that, allegedly, the drones had been delivered from Turkey.

"There were provocateurs there but they were not Turks, we know who was it was… We know, how much and whom they have paid for this provocation," Putin said.

The attack was a provocation, aimed at undermining Russia's relations with its partners, including Turkey, Vladimir Putin said, adding that Russia had taken additional measures to protect its military facilities in Syria.

"Firstly, these are provocations aimed at the collapse of the earlier reached agreements. Secondly, that is also an attempt to destroy our relations with partners — Turkey and Iran. We clearly understand that, and therefore we will show solidarity," Putin said.

The Russian leader furthermore said that the attacks had been thoroughly planned.

"Concerning the attacks, we have no doubts that they had been well prepared, we know when and where these drones were transferred, as well as the number of drones," Putin added.

On Monday, the Russian Defense Ministry said that the Russian military in Syria had disrupted a massive attack with the use of battle drones on its facilities in the country on January 6, intercepting six and shooting down seven more UAVs launched by militants.

"The US is constantly attempting to interfere in the internal affairs of other countries and considers this normal practice," Vladimir Putin said, adding that the US itself behaved aggressively in response to rumors of Russia's alleged interference in the US 2016 presidential election.

The Russian president has reiterated his position, saying that claims of Russian interference in the latest US elections were nonsense, adding that the anti-Russian card has repeatedly been played to threaten Donald Trump with impeachment. 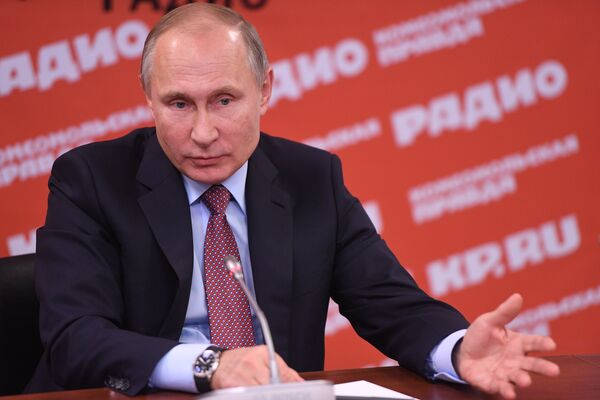 While speaking about relations between the US and Russia, Vladimir Putin said that Russia was ready to improve the bilateral relations, but a lot depended on the US itself.

"It [normalization of ties] does not depend on us. We are ready… but the internal political situation in the United States is not settling down. We see that and understand that the 'Russian card' is played in US political life, the incumbent US president [Donald Trump] is constantly threatened with impeachment and the imaginary intervention of Russia is used as a reason for it," Putin noted.

At the same time, Putin noted that any illegal unilateral sanctions against Russia by Washington would deteriorate bilateral relations.

"All steps aimed at any kind of restrictions and at illegal sanctions — I would say it is absolutely clear that they are illegal — will hinder our relations," the president said.

On Talks With the US on the START Treaty

Putin stressed that this could be done under the treaty but only if the other side was able to verify that there was no potential for reverse conversion of such objects.

"We do not have the necessary evidence yet. And that causes some concerns for us. But the dialogue is ongoing and I hope it will be positive," Putin said.

On the North Korean Issue

The Russian president noted that North Korean leader Kim Jong Un was a competent and mature politician, who managed to "win his game."

"I think that Mr. Kim Jong Un has undoubtedly won this game. He fulfilled his long-term task — he has a nuclear bomb, has a long-range missile — with a range of up to 13,000 kilometers [over 8,000 miles] — which can reach any place on the Earth, at least any place belonged to his possible rival… He [Kim] is an absolutely competent and already mature politician," Putin said at a meeting with heads of Russian media outlets, adding that the North Korean leader was likely to be interested in de-escalation of tensions in the region.

The Russian leader also pointed out the need to solve the conflict on the Korean Peninsula through a dialogue.

China Unlikely Seeking More Influence Over North Korea - Chinese Scholars
"One must take into account the current situation. And taking it into account one should act very carefully. When one sets a difficult goal to reach denuclearization of the Korean Peninsula, that can be done only through dialogue and negotiations," Putin said.

The president added that denuclearization was possible if all participants of the settlement process including North Korea were sure that their security could be ensured without nuclear weapons.

On Cryptocurrency Regulations in Russia

Russia's Central Bank acts conservatively in regard to cryptocurrencies, and its policies are justified since they are not supported by real monetary means and can only be used for transactions, Putin noted.

"Currently, it is mostly the prerogative of the Central Bank as it has enough authority on the issues of regulation of cryptocurrencies," the president said, adding that legislative regulation in this area would be necessary in the future.

"The Central Bank behaves conservatively and, in my opinion, this attitude is justified at present, because it is known that there is nothing behind the cryptocurrency, it cannot serve as a means of wealth accumulation, there are no material values behind it, and it is not supported by anything, it can be used to some extent and in certain situations in transactions, it is done quickly and effectively," the Russian leader said.

Putin stressed that responsibility for the situation with cryptocurrencies in case of legislative regulation of this issue will be assumed by the state, but at present, the citizens themselves bear risks while trading in cryptocurrencies.

The Russian leader noted that the country should not be dependent on foreign digital platforms, it can and will create its own products.

"It has to be done and it has to be done on a fair basis, sharing the risks and activities among all the participants so that we would not be slaves to the existing [digital] platforms, but could create our own. We can do it," Putin said.

The Russian president said that those platforms were being set up in the United States and in Europe, adding that Russia was already participating in the work on a single digital platform within the Eurasian Economic Union.

On the Upcoming Presidential Election in Russia

Vladimir Putin assessed positively the fact that he would face 15 rivals during the 2018 presidential elections in Russia. While answering the question on Washington's criticism of the election run ban on Russia's opposition figure Aleksei Navalny, Vladimir Putin said that the US was making a mistake by putting bets on their own candidates.

The Russian president noted that the designation of Russian media outlets as "foreign agents" in the US revealed Washington's attitude to "anyone in any way" influencing its internal political situation, especially during the pre-election period.

"The situation around our media outlets, which have been designated as 'foreign agents' and whose work was limited rather aggressively and maliciously, I would say, shows [the United States'] attitude to anyone who in any way influences the internal political situation, especially during the pre-election period," Putin noted.

The next presidential election in Russia is scheduled for March 2018, while the campaign started in December. International observers will be invited to monitor the election, while the usage of video surveillance is also being discussed by Russia's Central Election Commission (CEC).