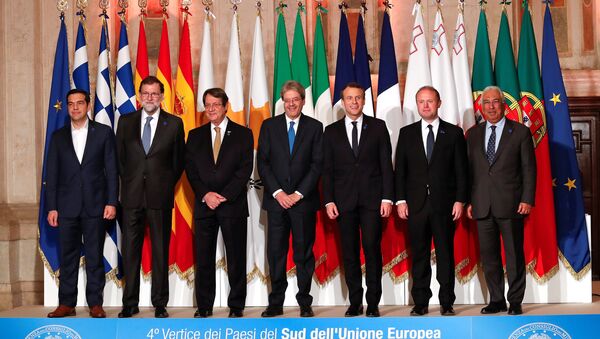 © REUTERS / Remo Casilli
Subscribe
International
India
Africa
The leaders of Cyprus, France, Greece, Italy, Malta, Portugal and Spain have reiterated their “firm commitment” to a common European policy on migration and called to make the union more responsive to its citizens, media reports have said.

In a joint statement released after their meeting in Rome, the leaders of seven southern European Union countries bordering the Mediterranean Sea underscored the need to strengthen the EU’s external borders, tackle human smuggling and work together to eradicate poverty and conflict, which have forced millions of refugees from the Middle East and North Africa to seek asylum in Europe, the Italian news agency Ansa wrote.

They also called to help Greece, Italy and Spain, the main entry points for refugees trying to enter Europe, to cope with the heavy administrative and humanitarian burden of accommodating and processing the incoming migrants.

EU Leaders Agree to Reform Bloc: Specific Plans and Projects to Follow – Macron
"We must fight together to put in place a migration policy that shows solidarity with the countries that receive these significant flows," Greek Prime Minister Alexis Tsipras said.

Faced with the daunting task of handling hundreds of thousands of refugees, Greece and Italy have criticized Poland, the Czech Republic and other EU countries which refuse to meet EU-wide refugee resettlement quotas.

The leaders of the countries, known collectively as the "Southern Seven," also agreed on the need to give EU citizens more say on how to make the union better and achieve “greater European cohesion.”

"We welcome the idea of citizens' consultations, all over Europe, on core priorities for the future of the European Union that could be organized from next spring," the joint statement said.

The seven leaders also embraced a proposal by French President Emmanuel Macron of EU-wide lists of candidates for seats in the European Parliament to counter the rise of populist parties tapping into growing public hostility towards the bloc.

Under the current system EU citizens can only vote for national party lists.