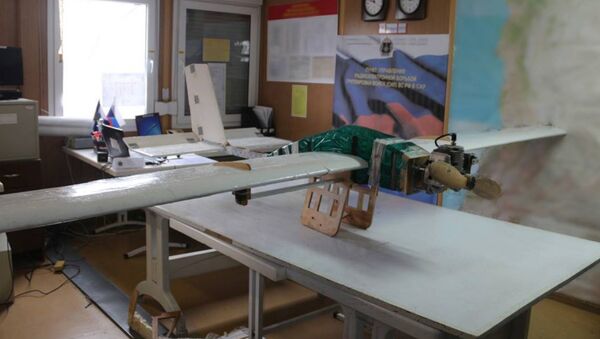 MOSCOW (Sputnik) - The recent "swarming" drone attacks on the Russian bases in Syria may be a precursor of many more similar assaults, with states possibly shuffling combat unmanned aerial vehicles (UAVs) testing to non-state actors, which calls for more control over the field, experts told Sputnik.

Russian airbase in Hmeymim and the naval base in Tartus were attacked with the help of 13 combat drones on January 6, but the assault was repelled. Russia's Krasnaya Zvezda newspaper reported on Wednesday, citing the Defense Ministry, that the drones were launched from the area southwest of the Idlib de-escalation zone controlled by the so-called moderate opposition.

This attack raises concerns over the potential of similar incidents in the future as well as the increased use of drones in military operations in general amid their lack of regulation.

"The attacking drones the Russian ministry describes are relatively simple in technology, but they can be effective. My opinion is that we will see much more of this and very soon simply because of the simplicity of construction," Nick Mottern, the founder and coordinator of Knowdrones.com, told Sputnik.

Mottern added that he had never heard of similar attacks before, but "the idea of sending many small drones on attack missions is exactly what the US is researching in what it calls 'swarming,' sending small attack drones in large numbers like a swarm of insects."

For instance, in October 2016, the US army successfully tested swarming drones, with three aircraft dispersing over 100 UAVs. The drones were then able to communicate with one another and perform a number of tasks. The Perdix drones, used in the test, began as a student project at the Massachusetts Institute of Technology.

Since such trials are not necessarily always documented it is unclear how many similar tests may have been implemented elsewhere, either by other states' armies or militant groups.

READ MORE: New PHOTOS of Drones That Attacked Russian Base in Syria Release

Chris Woods, the author of the book Sudden Justice: America's Secret Drone Wars, said the recent attack in Syria appeared to be the first combat test of a swarming assault and stressed that the drones, which, according to the Russian Defense Ministry, were equipped with modified mortar shells, could wreak serious havoc.

"Drone strikes by ISIS [Daesh] in Iraq and Syria have killed and maimed individuals using similar munitions — so it's certainly something to take seriously. And the fact that these were 13 drones deployed simultaneously — possibly the first time we've seen this kind of offensive swarming — is also a major concern," Woods told Sputnik.

While the attack on the Russian bases did not succeed, Mottern warned that the people behind it would be able to learn from this experience and add "protections against electronic capture and probably air defense."

Drone attacks are likely to remain local for the time being, because global strikes would require a more advanced type of infrastructure, available only to "high-tech nations," Emeritus Professor of Artificial Intelligence and Robotics & Public Engagement at University of Sheffield Noel Sharkey said.

"It would require satellites and airbases around the world. But nonetheless devastating attacks could still be carried out… An attack by 13 medium sized drones could be very effective and quite devastating if they had the appropriate infrastructure to support them. This is one of the biggest problems for non-state actors who don’t have their own satellites," Sharkey, who is also a co-director of Foundation for Responsible Robotics and Chair of International Committee for Robot Arms Control, told Sputnik.

Two Russian Servicemen Killed on Dec. 31 in Shelling of Hmeymim Base - MoD
The Russian Defense Ministry believes that the engineering solutions used by those behind the attack on its bases were already sophisticated enough to come from a country with hi-tech capabilities. However, the Pentagon has said such devices could be "easily be obtained on the open market" and called it a cause for concern.

Mottern, in turn, expressed concern that the future development of unmanned aerial vehicles might result in governments sharing drone technology with non-state actors for combat trials.

"I would say that any government as well as non-government groups using attack drones is involved in terrorism. In this case we could have nations involved in large drone building programs supplying technology to non-governmental groups for 'battlefield' testing. Very sad and tragic thinking for humanity," Mottern said.

At the same time, Woods, who runs a not-for-profit transparency project Airwars, pointed out that even a relatively simple drone, the kind that could be easily bought in stores, can be weaponized, which has already been done, mainly by militants in Iraq and Syria.

"While so far we haven't seen the use of these mini armed drones outside of major wars, there is a clear risk that we will see their use beyond conflict zones," the drone expert added.

The founder of Knowdrones.com considers an international ban on drones the only solution to the growing problem of combat UAWs.

Drones Attacked Hmeymim Base From 'Moderate' Opposition-Controlled Area
"I believe an international ban is the only way out of the drone killing nightmare that is now a reality for some many people living in drone attack zones, zones that are obviously expanding rapidly, with the Russian ministry report the latest evidence of this," Mottern said.

A number of state armed forces, including the United States, operate armed UAVs, but small, easy-to-buy drones, also pose significant danger, and the spread of such easy-to-access technology calls for more control.

"One effective route used by the US-led coalition was to work with Chinese software manufacturers to prevent the drones from flying in certain regions. The other obvious control is to limit access to explosives locally, so that the drones can't be weaponized in the first place," the expert said.

At the moment, the use of drones is mainly regulated by the states' aviation watchdogs in each given country, and not all states have relevant laws. The International Civil Aviation Organization has called for a single global drone registry in September in an attempt to introduce some common regulations and simplify tracking, but global rules on the use of drones are like to be some time in the making.

The views and opinions expressed by Nick Mottern, Chris Woods, Noel Sharkey are those of the experts and do not necessarily reflect those of Sputnik.