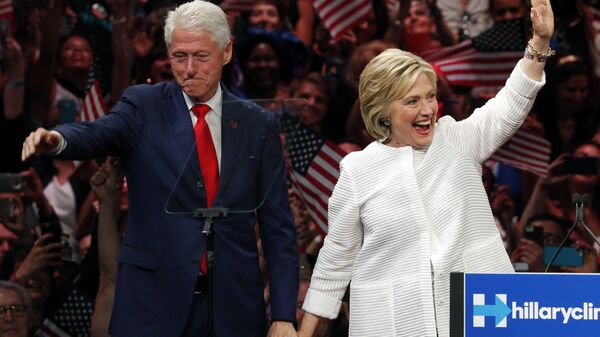 Ekaterina Blinova
All materialsWrite to the author
The Clinton Foundation probe may result in the exposure of foreign government officials and prestigious foundations, Wall Street analyst Charles Ortel suggested, speaking to Sputnik. It is probable that foreign entities were aware of the charity's alleged fraud and even benefitted from it, he said, assuming that Donald Trump will reverse the trend.

A new FBI probe into the Clinton Foundation should send an alarming signal to foreign governments and individuals who have provided donations to the charity over the past two decades, Wall Street analyst and investigative journalist Charles Ortel told Sputnik.

Bill and Hillary Clinton Facing Massive Exposure Over the FBI Probe – Analyst
The analyst pointed out that "out of about $2.3 billion in total declared donations [to the Clinton Foundation] since 1997, a large non-governmental organization called UNITAID that is backed by France, the UK, Norway, Spain, South Korea and other governments as well as by the Gates Foundation has sent more than $600 million towards the HIV/AIDS fighting part of the Clinton Foundation that was never lawfully organized or operated."

The investigative journalist emphasized that many other governments, such as Australia, Ireland, Norway, Saudi Arabia, and Sweden "have also sent large sums towards the Clinton Foundation but, so far, have failed to complain about boldly inaccurate accounting policies and evident defects in public disclosures."

In his previous interviews with Sputnik, the analyst, who has been conducting a private investigation into the Clinton charity's alleged fraud, has repeatedly raised the question as to why foreign governments remain seemingly reluctant to expose the Foundation's misdeeds.

"The numerous foreign governments that seem to be associated with Clinton 'charities' have behaved deplorably," Ortel told Sputnik in August 2017, suggesting that they apparently realized that a thorough investigation into the matter could result in "acute embarrassment and even legal exposures for individuals and [foreign governments] involved."

Over the past two decades the Clintons have created nothing short of a globalist network with their loyalists in senior positions in foreign governments.

215 Bill Clinton speeches, etc were approved by State Department while Hillary Clinton was SecState — led to $48 million for Clinton cash machine. That is a lot for the FBI and Congress to investigate. @JudiicalWatch already did the leg work — https://t.co/8Qm3hTxUln https://t.co/y5nY3mZgyH

​"How the Obama State Department waived hundreds of ethical conflicts that allowed the Clintons and their businesses to accept money from foreign entities and corporations seeking influence boggles the mind," Fitton highlighted. "That former President Clinton trotted the globe collecting huge speaking fees while his wife presided over US foreign policy is an outrage." 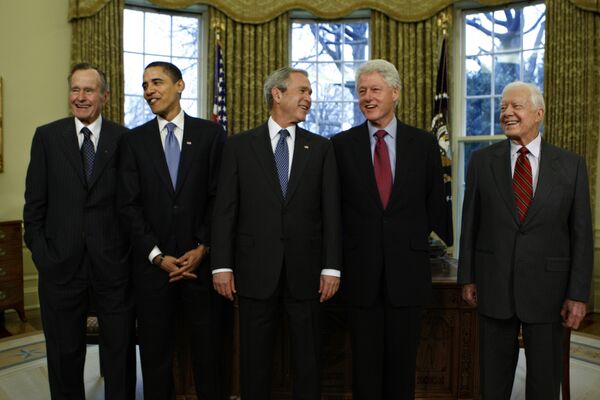 Will Trump Get Proponents of 'Unregulated Globalism' on the Run?

However, it appears that a reverse trend is now gaining pace. As the Wall Street analyst remarked in his November 2017 interview with Sputnik, Saudi Crown Prince Mohammed bin Salman's anti-corruption initiative that resulted in the detention of 11 princes, including Prince Alwaleed bin Talal, one of the world's richest people and a Clinton loyalist; his detention could be regarded as part of such a shift.

Wall Street Analyst: Clinton Foundation Probe to Affect Many in US Federal Gov't
Meanwhile, on December 21, 2017, Donald Trump signed an Executive Order (EO) which stipulates that US-housed assets belonging to foreign entities and individuals involved in "serious human rights abuse" or corruption could be frozen. Furthermore, the EO targets US citizens who either helped or participated in the aforementioned abuses. The order contains a list of 13 foreign individuals from Pakistan, Ukraine, Gambia, Sudan, Nicaragua, China, Russia and etc. The EO is based on the Global Magnitsky Human Rights Accountability Act (Public Law 114-328).

Does this mean the Trump administration is seeking to get rid of the Clintons' loyalists across the globe who, as one can easily imagine, may throw sand in the gears of the US president's foreign policy?

"Trump's team seems keenly aware of economic realities and wants to cement America's role as the largest unified market for goods and services in the world, as well as potentially the safest place to invest and store money," Ortel responded.

CCTV Commentator: Trump Dashes Hopes of Clinton-Backing Chinese Elites
According to the Wall Street analyst, "Trump's team sees that unregulated globalism, embraced by so many around the world, creates some valid opportunities, but is ripe for corruption while engendering stifling new layers of bureaucracy."

What Trump's team is seeking is to simplify "America's gigantic set of government programs and policies and moving to make this nation a preferred partner for projects inside and outside our borders," he suggested.

"Should President Trump continue to succeed, I believe the crony establishment loyalists who have prospered from 1989 through 2016 may continue their resistance, but with each passing day, more and more people around the world are beginning to admire steps that Donald Trump and his team are taking to reverse damaging policies and actions of the past," Ortel emphasized.

Why the Clinton Foundation Probe May Have Repercussions for Global Elites

Meanwhile, Trump prepares for promoting his "America First" agenda at the World Economic Forum in the Swiss town of Davos on January 23-26. According to Adam Shaw of Fox News, observers believe that Davos presents "a sort of 'globalist' supranational approach unlike the nationalist mentality Trump campaigned on."

Commenting on the event, Ortel asks a rhetorical question in one of his tweets: "I wonder how many people at Davos might be interested to learn that numerous governments and prestige foundations funded frauds at @ClintonFdn, while professional advisors covered these up?"

I wonder how many people at Davos might be interested to learn that numerous governments and prestige foundations funded frauds at @ClintonFdn, while professional advisors covered these up?https://t.co/8TBPgolSHx

​The analyst believes that there is nothing hidden that will not be disclosed.

"Given the size of this mess, given the importance of international charitable works, and given the prominence of so many persons who have cooperated and possibly benefited from these frauds for so long, I think it is past time for at least one government to make an example of all who enabled and ran what I believe could be, counting affiliates, the largest set of frauds ever attempted in modern history," Ortel concluded.