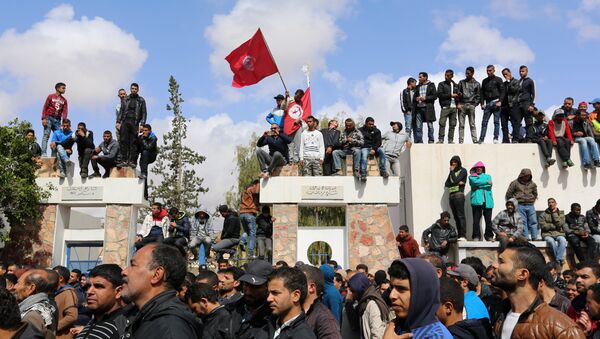 With dozens of police officers injured and over 200 people detained in the wake of the second night of violent protests in Tunisia, Abu Bakr al Ansari, an expert in North African affairs, told Sputnik that even though the protesters’ demands are mostly justified, some political forces are trying to capitalize on the ongoing unrest.

Tunisia has seen days of street protests against hikes in value-added tax and social contributions introduced earlier this month as the government grapples with a growing budget deficit and the need to meet its foreign debt obligations.

“Seven years after the revolution that led to the ouster of President Zine El Abidine Ben Ali, people want to see its fruits and have better living conditions. They took to the streets because the existing political parties are jockeying for power instead of tackling the problems facing the country and its people, who actually brought them to power,” Abu Bakr al Ansari told Sputnik Arabic.

He added that in order to ease the tensions, the country’s political political parties should reconsider their policies and listen to the needs of the people, something they can’t ignore.

Protests Against Unemployment, Price Hikes Take Place in Tunisia (PHOTOS)
In an interview with Sputnik, Farid al Alibi, a professor of political philosophy at Tunis University, said that “since the times of the former President [Zine El Abidine] Ben Ali, the Tunisian government has viewed popular protests as a plot and an instrument of redistribution of private and state property.”

“However, this theory simply holds no water because today, just like seven years ago, people are demanding jobs, freedom and respect,” Farid al-Alibi emphasized.

He added that the goals set out by the “Jasmine Revolution” of 2010-2011 were never realized, people have seen their living conditions go down and  tension and misunderstanding between themselves and the powers-that-be grow exponentially.

In the past few years, the North African country has been rocked by large-scale demonstrations held each January, which marks the anniversary of the Jasmine Revolution that toppled President Ben Ali.