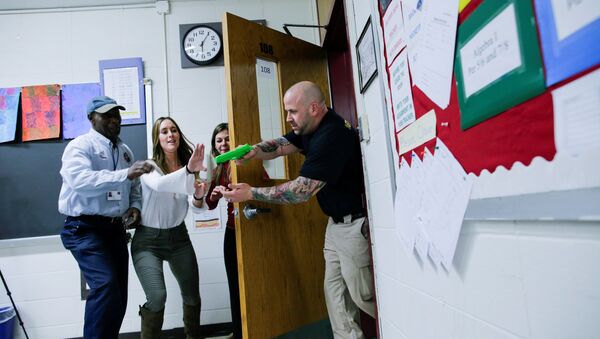 © REUTERS / Eduardo Munoz
Subscribe
A new simulation is being developed by the United States Army and the Department of Homeland Security with the aim of showing teachers how to respond in the event of a school shooting.

According to recently published research, almost 1,000 children under the age of 12 have died in shootings in the United States since the Sandy Hook Elementary School tragedy in 2012. In 2017 alone, there were at least 9 shooting incidents in the country.

Shootings in schools have raised the question of gun control in the US, however, there have been no substantial measures passed by the Congress, with most restrictions being opposed by the National Rifle Association lobby, which fears that gun-control measures are a step toward outlawing all private gun ownership.

Meanwhile, the US Army and the Department of Homeland Security have unveiled a new cutting-edge computer simulator which trains teachers how to act in case of an active shooting in the school.

Sputnik spoke with John Verrico, Chief of Media Relations for the US Department of Homeland Security' to get his take on the simulation.

Sputnik: How will the utilization of the simulation serve to reduce the number of fatalities in mass shootings?

John Verrico: Well, the idea behind the whole programme is to help teachers and school administrators understand what to do and what actions they could possibly take before law enforcement even arrives on the scene.

Quite often in these kinds of incidents, by the time the police get there, the majority of the situation is virtually over.

So it’s really important for teachers and school personnel to understand the procedures that they might have available to them, the precautions that they could take, and what they should practice doing, in order to understand how to keep everybody safe, like I said; before law enforcement gets there.

Even once law enforcement is on the scene, the idea is understanding how the police are going to behave and as well, the police need to understand what the teachers and staff are probably doing, so that everybody stays safe and that there are no inadvertent issues as well.

Sputnik: What is the purpose of being able to play as the shooter? Could it inspire further copycat attacks?

John Verrico: Oh not at all.  First of all, the option to play as the shooter, we designed that instead of using an artificial intelligence character because, first of all, we wanted to have the ability for tactics to change, for people to think on their feet, that role will probably be played by a law enforcement officer.

Gun Issue: Top Simulator to 'Teach Teachers How to Respond as First Responders'
It’s not really designed for a bunch of people to get in there and play shooter. The concept is that there is a lot of flexibility in the actions that are taken, but also it helps people to understand what the shooter is seeing when the teachers and school staff are taking different types of actions, so that they then understand the benefits or the problems with taking or not taking certain types of action.

The whole concept was not to show people how to shoot, but it was to allow people to understand the dynamics involved in how to protect themselves from it. Like I said; the shooter role is a very small piece of the entire programme, there are actually six different roles that are involved there.

Sputnik: Could the utilization of actual sound clippings from real attacks offend from the families of victims?

John Verrico: The only people who would have access to this are teachers, school staff, and law enforcement officers. This is not something that’s going to be released to the general public.

We did want to have a way to portray the horror of what goes on during these situations so that the teacher and the administrators and even the law enforcement officers can learn to react while all of that stuff is going on.

Sputnik: How could Homeland ensure the simulator doesn’t get leaked on the web and turned into a simple online game?

John Verrico: Well that’s one of the interesting things about this. That’s why I really kind of enforce the fact that it is not a game, it’s a simulation environment for training exercises. You can’t just play in there as one person; the programme is only going to be released to vetted organizations to ensure that it’s not getting out to the general public.

Almost 1,000 Children Under Age 12 Shot Dead in US Within 5 Years - Reports
Even if it does; it requires multiple people to be part of the scenario and its part of a whole larger training programme. If you were to get into the programme and interact in the environment, basically you would find yourself with nothing but an empty school structure. It’s not like there are activities going on or somebody’s doing seek and find, because none of that stuff happens until an actual training programme is established and all the roles are filled out.

Sputnik: Is there a limit as to how much training a teacher should receive in order to not pose additional security threats to the students and faculty?

READ MORE: At Least One Dead, 6 Injured in Shooting in US State of Colorado — Reports

Sputnik: Is the move to develop such technology a sign that the gun debate is buried for good?

John Verrico: Not at all. That’s a whole other issue as well. Let me first explain that this is the second version of this software, the first version was designed for first responders and it allows for responders of all different disciples to be able to train together, something we don’t normally have a chance to do in real life.

US Voters Pan Congress’ Efforts to Reduce Gun Violence as Inadequate - Poll
We created it in a hotel scenario and used a hotel because that gave us a variety of environments, such as large public areas, small rooms, narrow hallways, basements, restaurants, a whole variety of types of environments that they could work in.

It allowed for police, fire, ems, dispatchers and command and control to all operate in the environment at the same time, so that they understand and can practise protocols and procedures for dealing with, primarily an active shooter, because that was the most requested scenario from first responders that they said they needed help with, but also for fire scenarios, hostage situations, they were able to practise a variety of things.

This iteration was designed because school shootings are unfortunately so prominent and there was no way for police and teachers and school administrators to train together.

We basically adopted what we did for the first responder community and made it available for teachers and administrators, to be able to learn tactics, practices and procedures, for if a horrific event like this would happen.

There are lots of other programmes going on in other departments and other places where people are looking for ways to prevent these types of incidents, but the real issue that we were trying to address with this was; while all these other things are going on, what if something does happen? You need to know what to do.