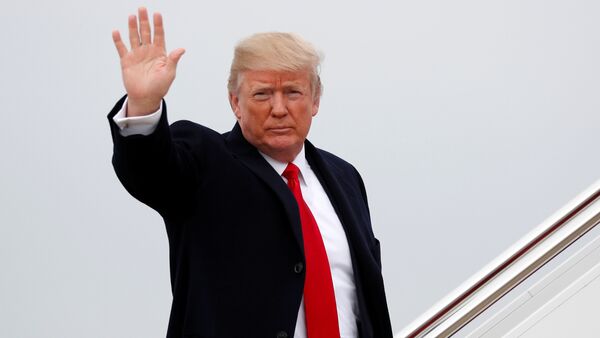 US President Donald Trump continues to fascinate the Swedish media, and is their most written about personality by far. The Expressen tabloid daily has taken verbal attacks against the US leader to the next level by quoting a Swedish professor who "jokingly" suggested that the president may suffer from advanced syphilis.

A recent tweet by US President Donald Trump, in which he commented on his mental health by calling himself a "stable genius," has spurred a strong reaction in Sweden, where Trump's habits and ways habitually make national headlines.

"Wow! Can we make a guess at late-stage syphilis?" Agnes Wold wrote to her 30,000 followers, linking to Trump's tweet.

​Advanced forms of syphilis can cause damage to the heart, brain and other organs and may even lead to mental conditions not unlike madness.

However, Agnes Wold, the granddaughter of the Nobel prize winner in chemistry Svante Arrhenius, later disclaimed her diagnosis as a joke.

"It was a so-called joke. I do not really think his megalomania is caused by syphilis," Wold tweeted, even though she herself admitted that superiority complex may be one of the symptoms caused by the disease.

​Wold's sense of humor was not appreciated by all of her followers, however, as some went on to call her comment "unfortunate of a chief doctor," "infantile" and "shameful."

READ ALSO: Swedes Hate Trump More Than Any Other Leader

Thanks, Trump! 'Fake News' Elected 'Word of the Year' in Norway
In 2017, Donald Trump was mentioned by Swedish journalists a record 229,392 times, corresponding to a record-breaking mention every two minutes. This is almost three times more than mentions of Prime Minister Stefan Löfven (83,899 articles). For the sake of comparison, Russian leader Vladimir Putin, the second-most written-about international politician, was "only" mentioned in 36,695 pieces.

"We have never seen anything like this. Trump is more written about in the media than any other person or event in the past two years. He is more written about than Swedish party leaders combined, including Prime Minister Stefan Löfven," Ioanna Lokebratt, media analyst at Retriever, said in a press release.

Lokebratt attributed this obsession to Trump's Twitter habits. With an average of five tweets per day, many of which are intended to provoke, the US President has a clear strategy of drawing attention, which the media is quick to give him.

On January 6, 2018, President Trump responded to reports that questioned his mental stability, following the publication of the exposé "Fire and Fury" by Michael Wolff, which shared uncomplimentary accounts from Trump's own staff.