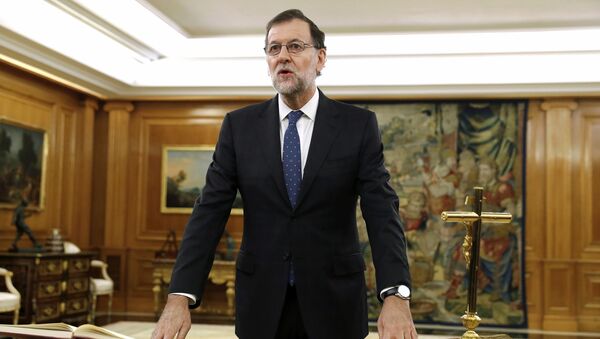 MADRID (Sputnik) - The Spanish economy grew by 3.1 percent in 2017, the country's prime minister, Mariano Rajoy, said Tuesday, adding that the political crisis in the autonomous community of Catalonia was "the only shadow looming over the economy."

"Spain ended the year of 2017 with a growth estimated at 3.1 percent," Rajoy said at an investment forum in Madrid, pointing out in addition that 611,000 jobs had been created in the country during the year.

The Spanish leader noted, citing the government's forecasts, that until 2020, the annual growth for the Spanish economy is estimated at 2.5 percent, while the rate of employment is expected to drop to 11 percent.

According to Rajoy, the unstable political situation in Catalonia is "the only shadow looming over the economy" of Spain.

Rajoy: Spain's Economy to Withstand Effects of Brexit
The minister underlined, however, that if a new Catalan government that would "respect the constitutional order" were to be formed in the near future, Spain's economic growth could be higher that the current forecasts.

Catalonia held its independence referendum on October 1. On October 27, the Catalan government adopted a resolution on the region's independence from Spain. The Spanish parliament's upper house, in response, voted to invoke the Article 155 of the Spanish Constitution, introducing Madrid's direct governance over the region. Rajoy then dismissed the Catalan government and its head, and called a snap parliamentary election that took place on December 21.