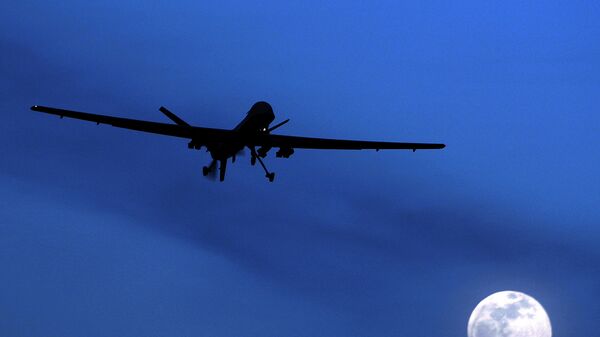 © AP Photo / Kirsty Wigglesworth
Subscribe
International
India
Africa
Special task forces to counter drones may be created in the composition of the Russian National Guard and deployed on sites of national significance.

"We are considering the creation of groups within our special task forces for testing experimental models of equipment for fighting unmanned aerial systems. Servicemen of the special purpose center are studying this problem jointly with the Defense Ministry, FSB [Federal Security Service] and FSO [Federal Guard Service]," Melikov told the Izvestia newspaper.

Daesh Access to Drones Used Against Russian Bases 'Cause for Concern' - Pentagon
According to the publication, special equipment for combating drones may be deployed on sites of national significance, for example, at nuclear power plants.

On Monday, Russian Defense Ministry said an attempt by terrorists to attack Russian military facilities in Syria with combat drones had been disrupted overnight to January 6. Ten of the drones targeted the Hmeymim air base and three were sent toward Tartus naval base. Three of 13 drones were brought to the ground in a controlled area outside the base, three UAVs detonated from a collision with the ground, and seven UAVs were destroyed by regular Pantsir-S air defense missile systems.

The Defense Ministry said then that the attempted attack marks the first time the terrorists have used modern guidance technologies on satellite GPS, as the drones used in the attack were capable of carrying out attacks from a range of about 100 kilometers.