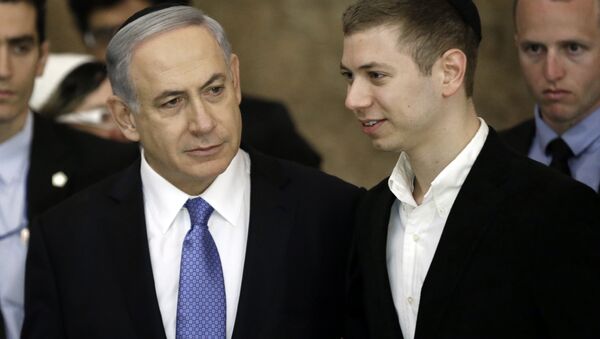 An Israeli news network has released the audio track of the alleged conversation between Prime Minister Benjamin Netanyahu's son and his friend outside a strip club, in which the young man drunkenly touts his father promoting a hefty gas deal in 2015.

The Channel 2 News' audio leak features what the television channel says are the voices of the Israeli Prime Minister's son Yair Netanyahu and Ori Maimon, the son of an Israeli gas tycoon.

While apparently inebriated, 26-year-old Yair is heard bragging outside a strip club about his father advancing a hefty gas deal in parliament so that gas tycoon Kobi Maimon could benefit from it.

"Bro, you got to spot me. My dad made an awesome deal for your dad, bro, he fought, fought in the Knesset for this, bro. Bro, my dad now arranged for you a $20bn deal and you can't spot me 400 shekels?," Yair said.

#Maariv:
A big political storm, a voice leak to #Netanyahu's son "Yair Netanyahu," his friend talks to the son of businessman Kobi Maimon: My father arranged for your father a profit of 20 billion dollars and you argue me for 400 shekels#Zionist#GroupPalestine#MB#قروب_فلسطيني pic.twitter.com/Z9yeaBeATC

The conversation apparently dates back to 2015, when Israel was embroiled in a political scandal over "newly discovered natural gas deposits and the rights to drill in them," according to The Guardian.

The Channel 2 News' recording comes as Benjamin Netanyahu is being investigated in a pair of corruption probes, known as cases 1000 and 2000.

The Israeli Prime Minister faces charges of accepting expensive gifts from wealthy supporters, in the form of cigars, champagne and jewelry in return for advancing their interests.

HUGE BREAKING NEWS: Yair Netanyahu, of Daily Stormer fame, has been caught in a hot mic moment while enjoying himself in a strip club in the company of the son of a gas tycoon, bragging about the money his father PM Netanyahu arranged for his friend's tycoon father.

Additionally, Netanyahu may be accused of alleged involvement in a multimillion dollar submarine deal with German shipbuilder ThyssenKrupp.  He vehemently denies any wrongdoing, saying that he is the victim of a smear campaign created by his political opponents.

In late December, thousands of people protested in the streets in Tel Aviv to demand Netanyahu's resignation over alleged corruption.

At the time, the "March of Shame" demonstration was held in central Tel Aviv for the fourth consecutive week. The beginning of January saw the continuation of anti-corruption protests, with more than 2,000 people taking to the streets in Tel Aviv.