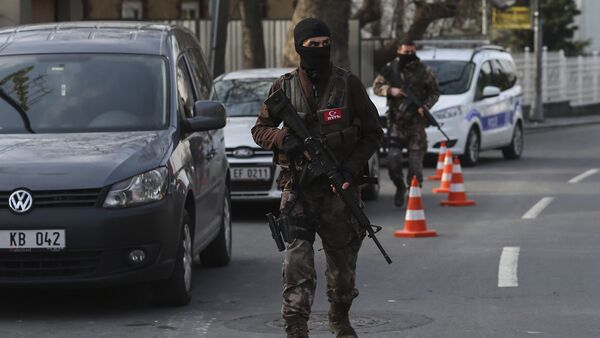 © AP Photo / Emrah Gurel
Subscribe
Turkish security forces have carried out over seven hundreds of counter-terrorism operations across the country from January 1 to January 7.

MOSCOW (Sputnik) — Seventeen militants of the Kurdistan Workers Party (PKK), listed as a terrorist organization in Turkey, have been detained during anti-terror operations across the country from January 1 to January 7, local media reported on Monday, citing the Turkish Interior Ministry.

The Turkish security forces carried out 729 counter-terrorism operations in the given period, the Daily Sabah newspaper reported.

Syria's PYD Has No Plans to Break Ties With PKK - Spokesman
According to the newspaper, out of the 17 militants, 11 were captured, while the others surrender to security forces.

A total of 32 militant shelters as well as nine explosive devices and mines were destroyed during the operations in the eastern and southeastern provinces of Batman, Diyarbakir, Mardin, Tunceli, Mus, Igdir, Bitlis, Bingol and Erzincan, the newspaper noted.

Tensions between Ankara and the Kurds escalated in July 2015 when a ceasefire between Turkey and the PKK collapsed over a series of terror attacks allegedly committed by PKK members. Turkish forces are currently involved in anti-PKK raids across the country, as well as in Iraq and Syria.

Recently, Turkish forces reportedly killed 5 members of the Kurdistan Workers' Party with the security forces carrying out an operation in the Ugur Tepe region and the Turkish Air Forces making an airstrike on PKK positions in the northern part of the Mehmet Yusuf Mountain.