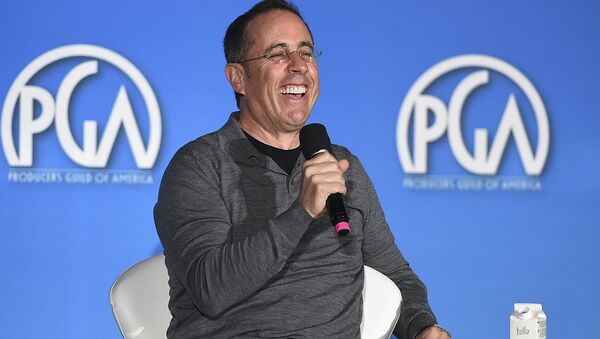 It was previously reported that the former star of the hit television series "Seinfeld" and his family traveled to Israel at the end of 2017, where the comedian gave two sold out performances at the Menora Mivtachim Arena. When he wasn't working, the 63-year-old star visited historic sites with his wife and their three children and dropped by the Israeli Air Force's Ramon Air Base.

Now, the Caliber 3 Israeli Counter Terror and Security Academy has revealed in a Facebook post that Seinfeld also took shooting and Krav Maga training at their facility, located in the Gush Etzion region of the West Bank, which was occupied by Israel during the Six Day War in 1967.

"Finally we are allowed to tell you! The legendary Jerry Seinfeld and his family were at Caliber 3 during their visit to Israel last week, they came to us for shooting training with displays of combat, Krav Maga, assault dogs and lots of Zionism. It was great," the post read.

Krav Maga is a military self-defense and fighting system developed for the Israel Defense Forces (IDF) that combines techniques from boxing, wrestling, aikido, judo and karate and is known for its focus on real-life situations and its extreme efficiency.

Israel Reportedly Aims to Bar 20 Organizations From Country Over Boycott Calls
Caliber 3, a counterterrorism and security training academy established in 2003 by IDF Col. Sharon Gat, provides expert training to military, law enforcement and government agencies. It also offers special programs for international commercial clients seeking a taste of the Israeli military experience, including a survival training, a paintball competition and even a summer camp for high school boys.

A basic package includes a simulation of a suicide bombing in a Jerusalem marketplace, immediately followed by a stabbing attack, a live demonstration with attack dogs and a sniper tournament. The cost of this basic package is $115 per adult and $85 per child, with discounts available for large groups, Haaretz reports.

Soon after the news broke, social media exploded with posts accusing the comedian of pretending to kill Palestinians on an illegally occupied territory and calling for a boycott.

Jerry Seinfeld and his family play fascists in the West Bank. Indoctrinating his young children to murder Palestinians and steal land. There is nothing funny about apartheid, occupation, settlement expansion, and executing occupied Palestinians. https://t.co/hypj7NLmwd

​I like Seinfeld the show, because at least on the show Jerry is a decent person, but in reality he supports illegal settlements and apartheid. @JerrySeinfeld what a douche. pic.twitter.com/ROD6UHVhxn

​​​​Before Seinfeld dropped in, Caliber 3 hosted for a training Levison Wood, a British writer, photographer and researcher, and a former paratrooper who documents his travel experiences in books and documentaries.