German 'System is in a State of Transition' – Political Analyst 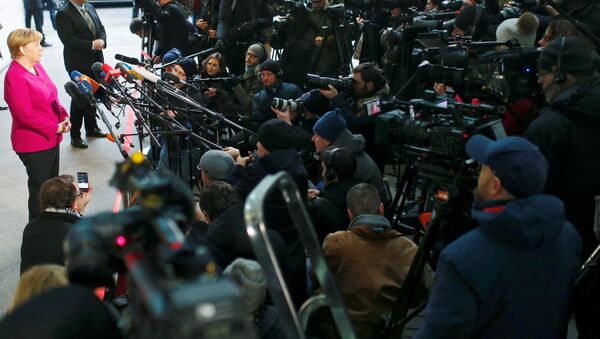 © REUTERS / Hannibal Hanschke
Subscribe
While German political parties strive to broker a new coalition government, it appears that the latest parliamentary election in the country may have heralded the rise of a new type of political leader.

Commenting on this development during an interview with Radio Sputnik, Dr Patricia Hogwood, Reader in European Politics in the Department of Politics and International Relations at the University of Westminster, described the situation in Germany as “more of a crisis and less of a crisis” and that “the system is in a state of transition.”

"What we see is a start of a movement towards political leaders who use a party – either a new party or a reinvented old party – as a personal vehicle. In this last election, the new FDP liberal leader, Christian Lindner, tried to use the structures of the old FDP in a similar way. He was in the center of the collapse of the first coalition negotiations in Germany… because he was gambling that if he could engineer a fresh election people would increasingly vote for his new style of politics and this would transform the system in a much more radical transformation process," Hogwood explained.

SPD General Secretary Describes Coalition Talks With Merkel's CDU/CSU
She also noted that "Germans are generally more aware of the consequences of political instability” due to their “parents’ and grandparents’ experiences during and after the Second World War."

"So, people are much more afraid of the possibility of political insecurity. When the first round of negotiations failed, the so called Jamaica coalition talks, people were very concerned about not having a stable government," she said.

Hogwood pointed out that if these talks fail, the SPD is likely to shoulder the blame because in the immediate aftermath of last September's federal elections its leader Martin Schulz announced his party's refusal to enter another coalition with Merkel. And even though both parties have a number of differences — “stumbling blocks” — as she put it, the SPD and CDU/CSU can overcome them.

"There’s potential for resolution and it’s most likely that Merkel will be able take advantage of it," she surmised.

The views and opinions expressed by Patricia Hogwood are those of the analyst and do not necessarily reflect those of Sputnik.

000000
Popular comments
What we see is a start of a movement towards political leaders who use a party – either a new party or a reinvented old party – as a personal vehicle. Oh, now who does that remind me of...? :)
michael
8 January 2018, 22:26 GMT2
000000
Newsfeed
0
New firstOld first
loader
LIVE
Заголовок открываемого материала
Access to the chat has been blocked for violating the rules . You will be able to participate again through:∞. If you do not agree with the blocking, please use the feedback form
The discussion is closed. You can participate in the discussion within 24 hours after the publication of the article.
To participate in the discussion
log in or register
loader
Chats
Заголовок открываемого материала
Worldwide
InternationalEnglishEnglishMundoEspañolSpanish
Europe
DeutschlandDeutschGermanFranceFrançaisFrenchΕλλάδαΕλληνικάGreekItaliaItalianoItalianČeská republikaČeštinaCzechPolskaPolskiPolishСрбиjаСрпскиSerbianLatvijaLatviešuLatvianLietuvaLietuviųLithuanianMoldovaMoldoveneascăMoldavianБеларусьБеларускiBelarusian
Transcaucasia
ԱրմենիաՀայերենArmenianАҧсныАҧсышәалаAbkhazХуссар ИрыстонИронауОssetianსაქართველოქართულიGeorgianAzərbaycanАzərbaycancaAzerbaijani
Middle East
Sputnik عربيArabicArabicTürkiyeTürkçeTurkishSputnik ایرانPersianPersianSputnik افغانستانDariDari
Central Asia
ҚазақстанҚазақ тіліKazakhКыргызстанКыргызчаKyrgyzOʻzbekistonЎзбекчаUzbekТоҷикистонТоҷикӣTajik
East & Southeast Asia
Việt NamTiếng ViệtVietnamese日本日本語Japanese俄罗斯卫星通讯社中文（简体）Chinese (simplified)俄罗斯卫星通讯社中文（繁体）Chinese (traditional)
South America
BrasilPortuguêsPortuguese
NewsfeedBreaking
10:30 GMTPremier League Matchweek 6 Preview and Predictions
10:19 GMT'I Explained Everything to Biden': Erdogan Reiterates Ankara Will Buy More S-400s From Russia
10:10 GMTCumbre Vieja Volcano Erupts on Canary Island of La Palma
10:09 GMTEpstein's 2009 Settlement With Virginia Giuffre Won't Save Prince Andrew From Litigation, Media Says
10:04 GMTFrench Armed Forces Confirm One Soldier Killed in Clashes in Mali
09:55 GMTEight Dead After Car Bomb Explodes Near Presidential Palace in Somalia, Reports Suggest
09:17 GMTMan Utd Manager 'Wouldn't Be Surprised' If Cristiano Ronaldo Still Played Football When He's 40
09:16 GMTTwo People Killed, 6 Injured in Explosion in Eastern Afghanistan, Source Says
08:46 GMT'Indian Press is Much Better Behaved': Biden Takes a Jibe at US Media During Meeting With Modi
08:24 GMTFBI Confirms Probe Into Alleged Attack on Female US Service Member by Afghan Evacuees at Fort Bliss
08:12 GMTOverprotected: Britney Spears' Father Monitored Singers Texts and Calls, New Documentary Says
08:09 GMTCanadian Catholic Church Apologises to Indigenous People for Abuse in Residential Schools
07:38 GMTWomen in Afghanistan Loved Fashion Until Taliban Took Over
07:22 GMT'Can't Get This to Function at All': 'Confused' Joe Biden Suffers Mic Malfunction at Quad Summit
07:19 GMTEuropean States to Remain US 'Underlings' Without Wake-Up Call After Paris Humiliated
07:18 GMTChina Warns US Will 'Dump' India, Australia, and Japan as Four Nations Convene for Quad Summit
07:14 GMT5.8-Magnitude Earthquake Strikes Ocean Off South Africa, USGS Says
07:03 GMTCNN Anchor Chris Cuomo Mum on Sexual Harassment Allegations Against Him
06:51 GMTUK Labour Party in Hot Water for Inviting Huawei to Conference
06:40 GMTBiden's National Security Adviser May Be Guilty of Perjury Over Clinton Campaign's Russiagate Plot