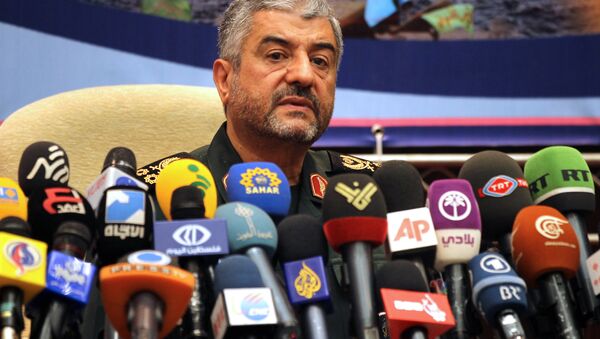 © AFP 2021 / ATTA KENARE
Subscribe
Responding to claims that Yemeni militia missile attacks against the Saudi coalition "prove" that Iran has been supplying the Houthis with advanced weaponry, Major General Mohammad Ali Jafari, commander of the Iranian Revolutionary Guard Corps, slammed the allegations, and explained why it was impossible for Iran to send weapons to the country.

Earlier this week, Saudi media alleged that the latest Houthi missile attack into southern Saudi Arabia proved that "the Iranian regime remains implicated in supporting the armed Houthis." The allegations follow on similar claims by US UN Ambassador Nikki Haley last month, who presented what she said was "undeniable" proof of Iran's involvement in the conflict in Yemen while standing in front of the remnants of what she said was an Iranian ballistic missile in a hanger outside Washington.

Responding to the collection of claims on Sunday, IRGC commander Mohammad Ali Jafari said that it was ridiculous to suggest that Iran could send any weapons, and particularly advanced ones such as missiles, to a country that's been subjected to a Saudi coalition blockade for nearly three years.

"How is it possible to send weapons, especially missiles, to a country which is fully under siege and there is even no possibility to send medical aid and foodstuff?" Jafari asked.

As for the real source of the weapons, the senior officer said that Yemen has a sufficient stockpile of its own missiles, which the Houthi rebels have successfully "overhauled."

"Missiles fired at Saudi Arabia belong to Yemen which have been overhauled and their range has been increased," Jafari said.

Saudi Coalition Plane Crashes in Yemen, Both Pilots Saved
The IRGC chief's remarks expanded Iranian officials' earlier response to the allegations made by Nikki Haley in December. At that time, Iranian Defense Minister Amir Hatami said that "such unreasonable claims" made by the US envoy "prove the collapse of US policy in the region and the world" and were "a ridiculous and unworthy performance." Iran's own UN mission issued a statement saying that US claims against Tehran were an attempt to cover up the Saudi-led coalition's crimes in Yemen, to which Washington was complicit.

The Houthi militia has reportedly had a number of startling successes against Saudi coalition forces in the last week. On Sunday, the Houthis claimed that their air defenses shot down a coalition warplane.  Saudi media blamed the crash on a technical malfunction, and said that the plane's pilots were safely evacuated. Earlier this week, the militia released a video showing Houthi navy divers seizing a US Navy underwater drone somewhere off Yemen's coast. On December 30, the Houthis reported downing a Saudi surveillance drone.

Yemen has been engulfed in a brutal civil and foreign-backed conflict since early 2015, when Houthi rebels ousted President Mansur Hadi's government from the country's capital. Since March 2015, a Saudi-led coalition has been conducting a military campaign in an effort to restore the Hadi government.